Who is Gossip Girl? 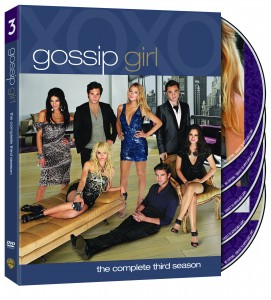 Gossip Girl is a secret guilty pleasure for me. I guess it’s not so secret now. I started watching it at the beginning and am addicted. Gossip Girl is based on the popular set of books. I keep watching because of the cute guys, fabulous clothes and the big mystery of “who is the gossip girl.”

If you aren’t up to date with the show, Season 3 of Gossip Girl is out on DVD.  I received a copy and there are some great  un-aired scenes and a funny gag reel.

Are you a fellow Gossip Girl fan? I would love to hear who you think the Gossip Girl is. Do you think they will even reveal the person? In the beginning I thought for sure it was Blair because the show led you to believe that. Once she was nearly destroyed from the gossip, I changed my mind. I don’t want to give away too many spoilers. After watching Season 3, which is out on DVD August 24th, I really think it is Chuck. I really hope they don’t have the gossip girl be some unknown who has never been on the show. That would be a big disappointment to me. Do you agree with me about Chuck? I would love to hear your theories.

“I have been hired by Warner Bros WBWord division to raise awareness for Gossip Girl: The Complete Third Season – which arrives on Blu-ray/DVD on August 24. Pre-order your set, and unlock an exclusive show clip by playing the Gossip Girl game here: http://bit.ly/cx8nDx

NMEDA Can Help With Mobility Solutions