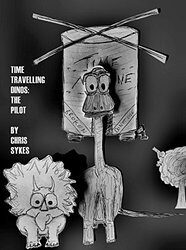 Time Traveling Dino’s: The Pilot  Hilariously written by one of my new favorite authors Chris Sykes. To get you a little acquainted and into this authors mind he wrote a little something for us.

By Chris Sykes author of Time Traveling Dino’s: The Pilot a and The Most Ferocious of Creatures

I started writing a long time ago. My first pieces, as an adult, were all horror related and not very good. I mean, they were good for what they were but I wanted to write something great. Whilst at work in a call centre I often found myself not really ‘working’. Some people could have labelled it as lazy, or not very good at the job, or a bad influence on others, etc. Some people did and some people did not. Well, I at least, did not. I am far from lazy. Like a sloth, I like my sleep and moments of motionlessness. And, also like a sloth, I have a downright determined and furiously focused mind when it comes to doing my own thing. My own thing has, and always will be, writing. (I hope no prospective employers ever read this.) 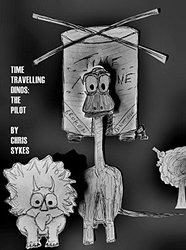 Sloths aren’t particularly all that great at writing; although they know stories like no other, only having two or three digits on each claw can be somewhat of a hindrance. If 100 of them ever got together with the likes of, let’s say Google, to create a specialised dictation device then perhaps we would have a new Shakespeare on our hands. I doubt it though. 100 sloths in the same room together sounds like a disaster to me, especially if the ever elusive four-toed-ninja-sloth snuck in.

Whilst at work, or should I say – whilst at ‘work’, I often found myself writing fun and creative snippets. They would never amount to anything but they helped me to find my path as a writer. It was around this time I conceived the idea for Time Travelling Dino’s. I was desperate for creativity. I had written a couple of rhyming picture books but they failed to grab the right people’s attention and, with a lack of confidence in my illustrating abilities, I left them to the side.

It is a well known fact that a call centre can be a place of low creativity and utter boredom. ‘Boredom knows no boundaries; prisons and classrooms alike offer no escape from the relentlessness of boredom. Waiting, it lingers in the dark, stealthily stalking its prey. Devouring sense and sensibility alike, it replaces them with the numbness of nothing. For boredom knows only one thing and that thing, is nothing. Although boredom can be everywhere, it can also be nowhere at the same time. Like a perfectly perplexing paradox, tantalisingly tottering on the tip of one’s tongue, it twists logic and reason into a distorted dyslexic disaster, questioning why it was ever said in the first place.’ (Time Travelling Dino’s: The Pilot)

One day an idea came to me, in a dream or a vision - I do not know which but it was most likely whilst at ‘work’. The idea was to create a series of short videos using stop motion animation. I raided my parents’ house and found two dinosaur toys along with an assorted bunch of other items I could turn into movie stars. The auditions went long into the night but eventually I found my cast. It was from this cast that Time Travelling Dino’s: The Pilot was born. For instance: Soul Taker wears a yellow spacesuit because his toy counterpart wears one, there are praying mantis insects in the story simply because I found toys of praying mantises, and so on and so forth.

The sets, I made out of cardboard and for the time machine, I stuck bits of old broken toys to an old tobacco tub. I wrote the scripts based on what was possible for a total amateur to film on his own. Eventually, I made four episodes – three of which form the beginning to the book.

Each episode was pretty terrible in quality (it improved when I bought a microphone and a camera, before, I just used an old

mobile phone – it was not about the quality for me, it was simply about creating something) but the story was awesome and something I planned on developing in the future, when I had the time.

I was not happy in my job and I was not happy living where I lived, although, that house was where Mia (our cat) turned up, scrawny and in need of help. After a couple of days with her sad, little face in our backyard, peering through our window, we took her to the vet for a check-up, and to see if she belonged to any family. She did not have an ID chip. She was massively underweight, dehydrated and severely stressed but she seemed to trust us. After calling all the cat charities and all of the local vets we realised that no one was looking for her and no cat charity had space for her. We had no choice but to take her in. This proved to be one of the best things we ever did. I’m telling you this because The Most Ferocious of Creatures is influenced by Mia.

Eventually, we decided to move to the home town of my partner because she found a better job there. I gave up my job and moved with her and Mia to Germany. I now had the time to write, whilst I adapted to the Germanic behaviour and language. So, as my partner slaved away at work, I sat down and wrote The Most Ferocious of Creatures (TMFoC).

I knew by then what I wanted to write. I wanted comedy, I wanted silliness and I wanted freedom. Free from ‘work’ and trying to adapt to life in a new country helped free all the crazy ideas I had ever had. My plan was to write something impressive, something a little different, something that will help encourage creativity in others. TMFoC can be picked up and put down at any point. It is an easy story to read but perhaps, as a book, it is more challenging than some others for this age group.

I think it is important that children question things. The side information in TMFoC is not based on facts but offers a different view to certain occurrences; like the reason mice run through your cupboards is to search for a long lost coin that is important to them. Or, that cakes do not like water but a sponge cake will follow a smelly person in the hope that they will soon take a bath. The sponge cake will then jump in the bath with the smelly person and soak up all the water. The side information is woven within the threads of the story and enhances the book.

Whilst I waited for feedback from publishers, I rewrote all the Time Travelling Dino’s scripts as chapters. I had previously planned to film the entire series but when we moved to Germany I did not keep the sets, nor did I keep the actual time machine – we did not have much space available to us. I was therefore no longer restricted to what went into the story. I could write what I wanted to and not simply what I could film. Nevertheless, I kept the same characters. I have grown quite attached to the toys and the characters they represent.

Again, I sent the story to publishers and again – no response, or simple rejection. It was tough but not something that would stop me. I knew the stories were good. But, I had no artwork.

I was advised and strongly encouraged to create the artwork myself. Like a sloth clumsily but carefully clutching a pencil, I drew. With my tongue sticking out of a corner of my mouth, I drew; as

each little, precise detail was made as imprecise as possible, as each defined line was undefined and scribbled down on the page, I drew. I drew my poor little heart out.

Anyway, I’m sure you get the point. My drawings are simply done and roughly finished but they do what they’re supposed to do. It is my hope that together with the stories they will inspire my readers to be creative themselves – young or old.

Roxy Rogers: Your Destiny is Calling by Emily Siskin-Toy Illustrated by Brian C.Krumm ; a book Review