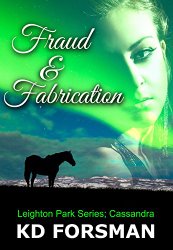 on 1 February 2015. It is already available for pre-order on Amazon

. The book is the first of the Leighton Park series, about the wealthy and eccentric Leighton family, their successful horse racing empire and their closely guarded family secrets.

Blogging has provided a creative outlet for KD since 2008; in her words… “I knew I had to get serious about my writing when I realised the characters in my head were not going to leave me in peace. They’re a bunch of crazies, but they’re my crazies.”

KD Forsman was born in the UK and immigrated to middle earth (New Zealand) when she was four, where she still lives today. She has honed her writing skill through her work experience, which includes product development, communications and marketing. She has had the privilege of being mentored by other published authors and hopes to entertain her readers through the stories she shares.

Cassandra has finally landed on her feet when she escapes to a new job after a relationship gone wrong. Leighton Park Stud, located in remote rural Canterbury New Zealand, seems a lifetime away from the hustle and bustle of city living, and that’s exactly what Cass needs to make a new start.

Despite the sometimes confronting experiences of life at the top thoroughbred horse stud and training facility, it’s a job Cass loves and she quickly settles into her new role as Secretary of the Stud.

When the mysterious Geoffrey Leighton, absentee eldest son of her boss John, comes to the rescue of a badly injured filly, Cass realises she’s found her soul mate. It’s not long before she’s engaged to be married into racing’s elite; and she’s happy to overlook some of the wackier sides of life with the wealthy family.

Her loyalty to the Leighton family are put to the test when nasty rumours circulate around the sale of a horse and the investigation that ensues. Add into the mix a closely guarded family scandal, an alcoholic step mum, a terribly accident prone husband and soon Cass is left wondering what normal even looks like anymore.

Cass tries to ignore the warning signs that all is not well in paradise. But heavily pregnant with their first child, her house of cards is starting to crumble. Suddenly she is confronted with a very real and dangerous situation.

Cass has the most difficult decision of her life to make. Will she stay and deal with it? Or walk away and blow the whole ugly truth wide open?