Book One of the Genesis Trilogy

Author of the Blackwood Saga

Definitely another way to look at the study of Physics.  ‘Unknown 9 Genesis’ is a novel by Layton Green mixes science with fiction that doesn’t necessarily make for science fiction. This is the first in a series featuring the character Ettore Majorana and Andie. This is a book that makes the 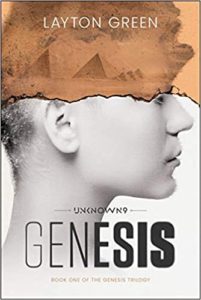 reader wonder about what the group ‘Leap Year Society’ is all about.  It is a story that covers two eras of history. It shows the relationship between the past and present of Ettore and Andie.

‘Genesis 9’ is a book that uses Physics terms in a fun way. It makes me want to learn more about this science.  Ettore is introduced at the beginning of the story and he is wondering about the ‘Leap Year Society’ and how he fits with it.  Is this the society that allows people to go back and forth between time periods?  This is a story that ‘leaps’ with Ettore’s story dealing with pre-World War II events and Andie dealing in the present with the Ishango Bone and Dr. Corwin’s journal and how these two stories are connected. Layton Green has written a story that was fun to read for his writing was descriptive and illustrative. The faint burst (sketch) at the beginning of each chapter is a good way of showing the transitions between the eras of the story with Ettore and Andie and the relationship between the two mysteries. Layton’s use of the physics terms made the story more interesting and showed a different way of traveling the world in many ways that may be true or not. This reader cannot wait for Book 2.  This could be a book that a physics teacher could read in part to introduce various ideas that the terms may introduce.

To solve the enigma of her past, a brilliant but troubled young woman joins a deadly global treasure hunt.

Strange hallucinations have plagued PhD student Andie Robertson throughout her life. After years of consulting doctors, she decided the visions were a glitch in her own mind until her mentor, the famous physicist Dr. James Corwin, is murdered in Italy, and Andie finds a stack of ink drawings in his office that bear a remarkable resemblance to her hallucinations.

Shocked, Andie digs deeper and learns that Dr. Corwin developed a device that might shed light on the very nature of reality. She is even more stunned to discover that her mother, an academic who disappeared when Andie was a young girl, might also be involved.

Determined to find answers, Andie follows a trail of clues placed by Dr. Corwin, for reasons unknown. In museums and cultural sites around the world, highlighting human achievement as well as a tapestry of secret knowledge woven into the threads of history.

Yet Andie is not the only one searching. Powerful forces know of her mentor’s invention, including a mysterious elite society that spans borders and will stop at nothing to find the device. Now a target herself, Andie and a disgraced journalist embark on a perilous journey that might hold the key to a new frontier of knowledge-and which also promises to unlock the doors of her past.

LAYTON GREEN is a bestselling author who writes across multiple genres, including thriller, mystery, suspense, and fantasy. His novels have been nominated for multiple awards (including a two-time finalist for an International Thriller Writers award).Also optioned for film, translated into foreign languages. They have reached #1 on numerous genre lists in the United States, the United Kingdom, and Germany.
In addition to writing, Layton attended law school in New Orleans and was a practicing attorney for the better part of a decade. He has also been an intern for the United Nations. An ESL teacher in Central America. Abartender in London. A seller of cheap knives on the streets of Brixton. A door to door phone book deliverer in Florida, and the list goes downhill from there. Layton lives with his family in North Carolina. You can also visit him on Facebook, Goodreads, or on his website.
Layton Green2019/2020ISBN:  978-1-9992297-0-2Reflector Entertainment451 pages

This Charming Man by Marion Keyes