The Blackwood brothers are 3 very different, but loving, protective brothers, that live in New Orleans, Louisiana. Will is the youngest brother and dreams of life being different, Caleb is a bartender and the playboy of the family, this middle brother also doesn’t believe in religion, then there is Val, the oldest and highly intelligent lawyer of the family, he is currently living in New 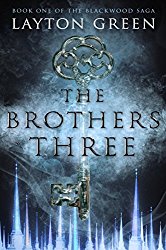 York.  Val also has some suspicious mind moving tricks he can’t explain. One evening, Will is asked by his best friend, Lance, a local New Orleans cop who loves showing off his authority with his big, burly self , to ride on his evening route.  Will loves the idea and agrees to go.  Someone has reported a strange animal sound coming from the city cemetary.  But, what Will and Lance encounter is more than any ordinary animal.  Some sort of Rottweiler dog, half dead and bullet resistant, is definitely ready to bring attention to someone else, a wizard type man who  owns the dog.  Will and Lance are chased out of the cemetary only by inches from the dogs rath.  Both men can hardly believe what took place, but it is Will who knows that man and that dog were not from this world and his searchings find more out about the wizard than Will ever dreamed. Val doesn’t really know what has made him decide to come home, but he knows he needs to find his brothers.

When Val arrives at the bar, owned by his brother Caleb, Will and Lance both arrive.  Will doesn’t know how to tell his brothers about the night in the cemetary, but he tries, and of course their reactions are all the same Will is losing it.

That night a man named Charlie arrives and he has some items and information for the three brothers.  Charlie has practically raised the boys after the death of their father and their mother was institutionalized.  Charlie gives a staff, a pair of rogue’s bracers and a sword to the brothers.  The father of the boys had told Charlie that the day would come when his sons would need these items and they would need to learn about their dad’s life.  Unknown by any signs as children, Mr. Blackwood, was a wizard and he left Charlie in charge of his sons and these things he prayed they would never need, but now was the time Charlie had to let them know their birthrights.   Believing this is some sort of prank, Val and Caleb laugh it off, but Will knows that the man and dog from the night before were not ordinary and they were linked to his father’s heritage.  Before Charlie can explain all that their dad wanted them to know, the strange wizard from the cemetary arrives and trouble begins.  He grabs Charlie and says he will kill him if the items given to the boys aren’t given to him by the next day.  Charlie is able to leave a note from the dad behind for the boys to follow. The note has a key which leads them to a door that opens inward to a small room that just happens to be in another time and era of wizards, creatures unknown to this world, sorcerers and things totally unimaginable.

The brothers aren’t the only ones who arrives in this New Albion, Lance had also gone through the portal door with the brothers. New Albion is somewhat similar to New Orleans as far as scenery goes, but people flying through the air and creatures as big as mountains are quite different from the average person from New Orleans in the 21st century. What lies ahead for the 4 men is unbelievable, but they must find the answer to the puzzles that will be the only way to free Charlie.   This world is full of mazes, trap doors, giant poisonous worms, spider creatures who trap Will in a cocoon.   The team of 4 hire help from New Albion that is able to teach them the ways of this new world, but as friends are made they are soon lost throughout the journey to find the answer from the wizard of all wizards.   Math solutions and magic get the brothers through the maze, but not before hearts are broke and lives are changed. I loved this book!    How Mr. Green could write a book with puzzles and equations and such imagination is unexplainable to someone such as myself.  Full of fantasy, diabolical games, evil and creativeness like I’ve never known – this book will keep you on the edge of your seat as you turn every page.  I couldn’t wait for things to get better, but I hated to see the book end.  Luckily –this is Book One of the Blackwood Saga so, we get to carry on later with  these brothers.

The ORPHAN of TORUNDI by J. L. McCreedy a book Review

Bear Hugging and Cancer Crushing by Anna and Eric Gilcris