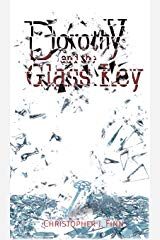 SEARCH BOOKROOM REVIEWS on Bookshop
Dorothy
and the
Glass Key
Christopher J. Finn
2019
ISBN: 978-1-645750321 paperback
ISBN: 978-1-645750338 hardback
Austin Macauley Publishers, LLC
mail-usa@austinmaccauley.com
242 pages
This is a story of wonder and wandering. From Austin Macauley Publishers This is the story of girl named Dorothy who has many adventures through time and space.  Dorothy is a child from a sad home where a mother was overworked and her father was an alcoholic who was very unhappy.  The story begins with the main character of Dorothy in a vegetative

state and is a resident in a rehabilitation center due to her adventures through her adventures through various times and places and being with various kinds of people through time, but are linked through various keys that match to hopefully make it home again somehow.
Christopher J. Finn is the author of this psychological story of love and trust. ‘Dorothy and the Glass Key’ is a story that is lead by the ‘Spintwister’ whom seems to lead Dorothy and others to find a way to live through their various pairs.  The characters learn to fight their battles in different ways.  In all the characters journeys with the keys Dorothy and Charlie land or lead them to fields that are surrounded by forests with distinct perimeters, but not during the last there were no perimeters and it was a beautiful place and this was when and where they had to make various decisions on living.  All in all, ‘Dorothy and the Glass Key’ is the story of making decisions that will help or hurt them.
This is a novel that can be used by social workers and counselors who would like a way to illustrate good and bad decision making skills as shown in the lives of Dorothy, her father and mother, Charlie, Ragesha, Max and Isais and even the Spintwister.  These characters learn communication as well as learning decision making skills.
This is certainly a fun book. Constantly on the edge of your seat guessing what is going to happen next.Very good character development .If you are looking for something a little different this one could very well be it..Great ending and a must read!

14-year-old Dorothy Alston had to grow up fast when her father’s alcohol-induced carelessness resulted in a house fire that claimed her mother’s life. She finds a new life on her uncle’s farm in Florida…but not for long. Now, thirty-four years later, Dorothy’s in a permanent vegetative state and it’s up to Ellen Steward – the hard-working, slightly jaded administrator at an upscale rehab facility – to unravel the mystery that landed Dorothy in this condition. With some unexpected help, Ellen unwinds Dorothy’s fantastical narrative. It begins with a strange glass key that leads Dorothy to worlds that exist between time and space. She awakens a dark creature who feeds on the pain of the young. Ellen discovers that even she is wrapped up in Dorothy’s strange saga. If she wants to save her, Ellen will have to give up everything. But if she fails, much more is at stake than anyone could have imagined.By Austin Macauley Publishing

Christopher J. Finn has long been a fan of things that are quirky, odd and dark, believing those aspects make for the best stories. Dorothy and the Glass Key, his debut novel, falls right into those categories.

Christopher J. Finn lives in Missouri with his wife and three kids. When he isn’t writing his next novel, he is painting, woodworking, playing PS4 with his pre-teens or watching the latest supernatural thriller show with his wife, his dogs, and pet leopard gecko.