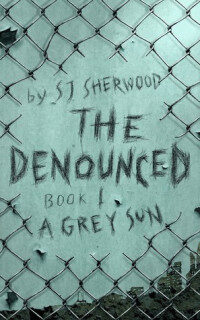 A convicted Denounced, sentenced to death.

When sixteen-year-old Ned is wrongly convicted and kidnapped to a secret location, he meets ninety ‘Denounced’, and a terrifying truth begins to unfold – one that will change the world forever.

Forced to lead a Pod of five, Ned begins to realize thousands of lives could depend upon him. A survivor by nature, he now has to face his past, confront his destiny, and fight a System that has never lost.

I don’t think I will ever be able to get enough dystopians ever. This particular genre is easily my most read, and it is likely because I was getting fully immersed in the reading world just as series like Hunger Games and Divergent were making huge waves, which brought many more authors to that genre. Today I’m reviewing A Grey Sun, the first in a new dystopian series. I will admit, upon first glance I feel like the cover could have been better, but that could also be just me. It kinda works as a more minimalistic cover however, so to each their own.

Getting into this book, there is really no easing in. You are dumped into the action from the very first page, where the main character Ned is rescued (?) from certain death. But then he goes on to a training camp, and you begin to wonder if this rescue was really better than dying. Especially when there’s still a chance he could die anyways.

There’s quite a cast of characters, bringing to mind a series like The Maze Runner. But, despite all of the similarities to other dystopians, this new series has a good chance to stand on its own. We learn just enough about the world to be drawn in, but there is plenty of space to learn more in later books, which is very important if an author wants to sustain a series.

I honestly found the “mother figure” a bit creepy and strange, something just felt off about her. But I suppose that’s the point, as you go the entire book wondering if she really has the best interests at heart for these kids.

I’m definitely interested in reading another of these books, I want to know how the story ends!