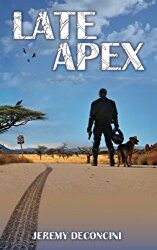 A review by  Mark Graham

‘Late Apex’ a novel written by Jeremy Deconcini is a story of Ben and his working through his various issues. 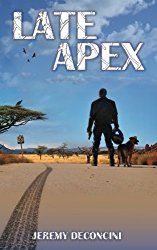 Ben has survived many battles and will live to see more. He is a person who works for the government in various capacities, but is actually a secret agent. A traveling man who must find ways of solving personal and professional problems.    ‘Late Apex’ is a fast read of short chapters that I feel could be used in an American Government/Political Science course. It covers African and maybe Middle East countries and cultures. Jeremy Deconcini’s  book will promote conversation and discussion on how Ben does business. The chapters which as mentioned are fairly short makes them easily understandable and made the plot flow. There were points in the book that kind of reminded me of what has occurred in history and still going on today. With the economical and political as well as the social implications that can be seen through Ben’s journeys through South Africa and his memories of other countries. This is an intriguing read and Ben became a real person to me. Ben is an Every man.

Jeremy DeConcini is an author and surf instructor living in San Diego, CA and Tucson, AZ. A former Special Agent for the US Department of Homeland Security in Los Angeles and San Diego, he worked in undercover weapons smuggling and non-proliferation, as well as anti-terrorism and narcotics efforts. He has worked as a lawyer, a real estate broker, university professor, ski patroller, surfboard shaper and survey diver.