General Meade a Novel of the Civil War 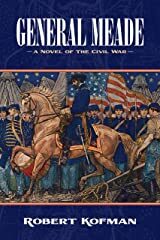 –A NOVEL OF THE CIVIL WAR-

Let me start out by saying ,GENERAL MEADE-A NOVEL OF THE CIVIL WAR-is a book any civil war buff will thoroughly enjoy. I’ve read quite o few books on the civil War and I’ve always enjoyed the historical fiction genre.

Seen through the eyes of General Meade. This historical fiction novel shows the Unions constant struggle trying to find a General to beat Lee .The 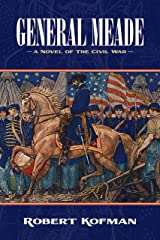 eastern battles of the war. Bull Run,Fredericksburg,Gettysburg. It delves into the thoughts and struggles of Abraham Lincoln as he tries to keep the Nation together.

It’s amazing how things as far as politics have never really changed. The profiteering , the in fighting in Congress, the favoritism.Just like today you have the Civilian leaders of the country trying to tell the Military how to fight a war.It seems the old saying “The more things change the more they stay the same” is true.

is probably one of the lesser known heroes of American History. His contribution to the American Civil War is Underrated at best. The author Robert Kofman did a very good job bringing this part of history to life. It’s a story as a personal story of General Meade as he constantly seems to be fighting to prove himself. We see his thoughts through letters sent to his wife. His personal family life , the sickness of his son and the well being of his wife.

Aside from the personal of course is the war. This is a very well researched account of the Eastern Civil war battles. The excellence of the Confederate Generals like Robert E. Lee and Stonewall Jackson.  The ineptness of some of the Union Generals. I’ve read a few of these Historical fictions of the Civil War. This one is not quite the “Killer Angels” but it is a close second.

As the Civil War rages on, President Lincoln desperately seeks a commander to defeat the seemingly invincible Confederate general, Robert E. Lee, whose army has invaded Pennsylvania. Lincoln turns to the Old Snapping Turtle, General George Meade—a courageous man with remarkable integrity and a fiery temper—to save the Union during its greatest time of need. Just three days later, Meade confronts Lee’s troops at Gettysburg, resulting in the bloodiest and most dramatic battle of the war.

Delivering a glorious victory, General Meade vanquishes the Confederate Army, forcing a retreat south. But for Meade, the battle is far from over. At first heralded as a hero who turned the tide of the war, he falls victim to a nefarious smear campaign that threatens to ruin his reputation and his career. The general is forced to muster all his strength to persevere against an onslaught of political attacks, all while leading the Army of the Potomac and serving his superiors: General Ulysses S. Grant and President Lincoln. A compelling work of historical fiction, General Meade: A Novel of the Civil War paints an engrossing picture of an unsung American hero. Filled with primary sources, including letters written by Meade himself, the narrative uses firsthand accounts to reveal fascinating details of life in a nation dangerously divided.