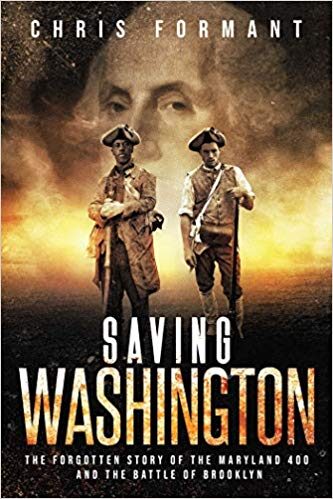 I thought this post fitting for Veterans Day this year. SAVING WASHINGTON The Forgotten Story of the Maryland 400 and The Battle of Brooklyn is the story of what could very well be the most important and forgotten battle in American history. If at the beginning of the American revolution Washington’s Continental Army did not escape New York the war could have very well ended before it got started. 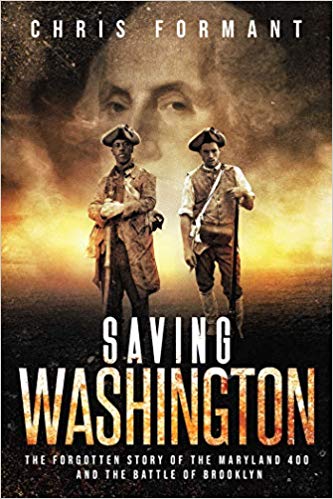 In this epic adventure based on scholarly research, two young aspiring Baltimore merchants, one white and one black, march to Brooklyn as part of the Maryland militia. Undertrained and under equipped, they would soon be on the front lines of one of the most decisive battles for American independence. Author Chris Formant immerses us in their dedication and their sacrifice as he weaves an epic tale, which includes actual historical figures. These all but forgotten men of the Maryland 400 who held back the British, made it possible for Washington to evacuate hundreds of soldiers to Manhattan and create a new military strategy that turned the tide of the Revolutionary War.

As someone who loves reading Historical Fiction. My favorite subject being American History I could not wait to dive into this book. I of course knew all about George Washington’s army escape from New York at the beginning of the American Revolution.At least I thought I did. It must be admitted I was never aware of the Maryland 400 and their part in the battle and their sacrifice.

I think the author gives us a very good understanding of the turmoil of the times and the leading up to the revolution. The book is not only about the Battle of Brooklyn. Chris Formant helps the reader understand what led the American Colonies to their desire for independence. He also shows us what young men at the time might have been thinking and what made them want to join up and fight. In the eyes of these American Revolutionary’s it must have seemed an impossible task. At this time in history Great Britain was The Super Power in the world.

This is a great book for any age. If you are interested in history , especially American history put this book on your shopping list. As Historical Fiction goes Saving Washington ranks right up there. Like The Killer Angels by Michael Sharra and John Jakes Kent Family Chronicles, Formant intertwines historical figures like Washington ,Cornwallis and others very nicely.

As for the story itself I learned quite a bit. Although the author does admit to taking a few “Liberties” in the writing to help move the story along. It’s for the most part factually correct.The friendship between the two young men is inspiring. Joshua and Ben are unsure at first what this uprising is all about. Through a series of unfortunate events they become true Patriots. They join the Maryland Militia thinking more in terms of protecting and keeping the peace in their home Colony of Maryland. They soon find themselves on the road with their regiment marching to New York and to war.The story of the Maryland 400 is inspiring and after reading this book I did a little more research about them. The importance of what these men did should never be forgotten.They literally saved the Revolution and of course George Washington.

You can find this book now at Amazon

For more about this subject visit Finding the Maryland 400 here

CHRIS FORMANT is a student of history and former top executive of a multi-billion-dollar global business and now technology company CEO. His debut novel, Bright Midnight, received lavish praise and has been dubbed the “Da Vinci Code for Rock and Roll Fans.” In the book, Formant created a mystery in which he re-imagined the deaths of rock icons as murders.  Chris splits his time between Baltimore, Maryland and Sedona, Arizona.

Virtual travel,see the World without Ever Leaving Your Home