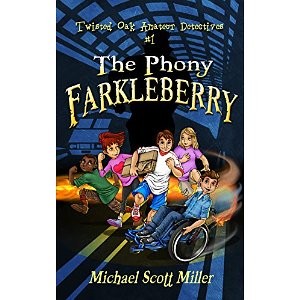 A middle school reader book series.  The first mystery is a new series called the Twisted Oak Amateur Detectives.  A group of five kids play detectives to find out who stole a famous painting from an art museum.  Tyler(one of the five friends) has a mother who works in an art museum and there is a famous exhibit that is  at the museum.   Because of this famous exhibit,  there is a special gala and dinner to honor and show off this famous exhibit of paintings.  Tyler attends this gala with his parents, sister and chooses to invite his friend Melonie to the gala.  A few days later, a painting from this famous Michaud exhibit goes missing and is replaced by a fake painting.  The group of five friends decide to play junior detectives without letting their parents know.  The five some are a bunch of kids who are brainy and studious.  A bully at school, chooses to bully this group of friends and call them the nerd patrol.  The five stick together and do their best to not let this bully get under their skin.

The five friends begin their spy work to solve the mystery of the missing painting!  The computer smart kid of the group puts spyware on a woman’s computer to listen in on her conversations to determine if she is the one who take the painting.  The five also go to different art galleries, pretending to be on a school assignment to gain knowledge about museum theft and how one can tell the differences between real paintings and forgeries.  The kids believe they have solved the case and take evidence to the police.  Will the police believe the kids and take them serious?  Do they solve the mystery of the missing painting?

This book has themes of friendship and having self confidence.  The book also shows how the five some look as heroes to the school bully!  This book teaches kids how to stand up for oneself and how to display self confidence to reach a goal.  The book will interest many kids.

“Where Is Robin” by Robin Barone

Why Smart People Hurt , by Eric Maisel : A Book Review