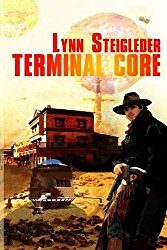 SEARCH BOOKROOM REVIEWS on Bookshop
Terminal Core
Lynn Steigleder
Soulfire Press
ISBN:  978-1938985-97-3
2016
347 pages
A cowboy story meets science fiction is what ‘Terminal Core’ by Lynn Steigleder has written for all readers.  This is 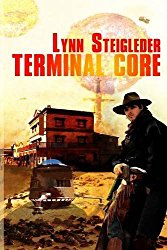 story of two planets Earth and Aon and and two centuries or more.  ‘Terminal Core’ is an adult novel that covers what could or has already happened in our society dealing with ecology and conservation and what the various ideas of pollution will or could develop. This is a story that seems like it is going to be a western style book as the ‘Louis Lamour’ stories, which they are with some of the description used, but could also be compared with ‘Stephen King’ and other science fiction books.
In chapter 21 this story mentions what is wrong with society in so many words.  We can all learn from this fast-paced book and thanks to Lynn we may begin to figure out ways we can all work together to solve any environmental issues.  The characters learn to work together for  the survival of each other and their planets.  Lynn has did his research in writing this story.  The description of the ellacks as well as other characters on Aon are very well developed and I can picture them vividly.  This is also a great novel to be used in Creative writing courses dealing with fiction, but with a concentration in science fiction and history.  The story also contains ideas for discussions dealing with contemporary issues as well.  ‘Terminal Core’ is a novel that makes the reader think as well as being entertained when reading.

Aon, a solid core planet made from the priceless and most dense element in the galaxy, caladium, is under silent attack. Plans are made by off-worlders to dissolve the unbreakable core using crude oil obtained from 19th century earth. Once the oil is refined, the byproduct, gasoline, will soften the caladium, allowing it to be collected. It is soon discovered the core is made from living beings created from caladium itself. The off-worlders employ a band of corrupt inhabitants to carry on this work. They find themselves in a constant struggle with a small coalition of Aonians bent on saving their home world. Both factions clash with the indestructible core creatures. With horrendous beasts one step behind and deadly pitfalls ahead, the coalition struggles to finish its journey, hoping to insure their races survival.

Lynn Kevin Steigleder was born in Richmond, Virginia. He spent most of his adult life as a supervisor in the field of construction and fabrication. When Lynn’s department was outsourced within two months of his diagnosis of multiple sclerosis, he realized the need to transition into a new career path due to his energy and mobility challenges. So why not try writing  being a Fan of authors from  DR Seuss to Stephen King he gave it a shot.

Check out his Blog HERE