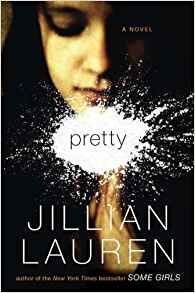 An Interview With Jillian Lauren by Christina Zawadiwsky

1. As evidenced in your book, do you think that addicts become so (negatively) involved in the present (which quickly becomes the past) that they can’t begin to imagine a good future?

JILLIAN: On the contrary, I think that addicts ferociously avoid the present moment. This is one of the reasons that I feel addiction is a tool with which to explore not just substance abuse but rather the entire culture of compulsive distraction.

2. In Pretty, Bebe’s love for her unborn child propels her away from a bad relationship and towards a future: did something similar (not necessarily the conception of a child) happen to you?

JILLIAN: I have personally struggled with chemical dependency, but I was driven to change simply by how unbearably awful things got. I didn’t have any motivating goal other than wanting to not feel so terrible all the time. But when I was constructing the narrative of Pretty, the theme of motherhood and care-taking kept coming to the forefront. The pregnancy seemed an excellent vehicle to explore those themes.

3. Your book and especially the dialogue within it has great fluidity; do you just write when inspired, or do you revise extensively?

JILLIAN: Both. I’m big on routine and I generally write at the same time every day for a specific number of hours. This is less of a hard and fast rule since adopting my son, but I still try to adhere to it as much as possible. But I also take notes all day long and try to make sure to get out a pen when something starts bouncing around my brain. I like to think the fluidity is a combination of both the freer writing moments and the extensive revisions.

4. Pretty also has an urgency to it; is it somewhat autobiographical, and are you sometimes talking about yourself in it?

JILLIAN: I culled many of the details in Pretty from my own life, but neither the narrative nor the protagonist are autobiographical. However, I certainly use both of those things to explore questions that are urgent for me.

5.The part where the jazz group leader “reveals” to Bebe that her old boyfriend used her and she romanticized her past with him is quite a shock when reading the book (although it may be something that many strippers/addicts feel at different points in their lives), and a real revelation. Did you plot out the story to put it in that particular spot.

JILLIAN: That was one of those moments that revealed itself to me in a later draft of the book. It was unplanned. When it came out of Billy’s mouth, it was as much of a surprise to me as it was to Bebe. Those sorts of surprises are the most mysterious and exciting part of the writing process for me.

6. Parts of Pretty are very poetic, for instance Bebe’s great feeling of love for her boyfriend who’s been killed in a car accident, Bebe’s love of being pretty in an unusual manner (e.g.what she wears and her red hair-do for the graduation party), and Bebe’s honesty about the AA members bearing witness to each others’ experiences (so that they know they’ve existed). Have you experienced these feelings?

JILLIAN: I like to think that I’ve experienced all of the emotions in the book, though it may have been in very different scenarios.

7. Bebe is adopted, as you were, and as your child is. I’ve read that adopted children are often scanning the populace, looking for people who are physically like themselves (since their adopted parents aren’t, and most people’s parents are). Have you experienced this?

JILLIAN: Actually, Bebe isn’t adopted. But she does lose a father at an early age and grows up with a step-father from whom she feels alienated. So I don’t think that scanning of people in search of physical resemblance is relevant to Bebe’s experience. As for myself, I’m not sure I scan for people who look like me, but I know that I’m unusually fascinated by siblings with a strong resemblance to each other.

8. How does it feel to become well-known for baring such intimate parts of yourself to the general public?

JILLIAN: It feels freeing. Publishing my memoir helped me to stop compartmentalizing my life and to let go of a degree of secrecy that I don’t believe was useful to me at all. And I think that my honesty has been helpful to others, so that makes the loss of privacy entirely worth it.

9. Bebe is surprised when the social worker takes her back to the halfway house (and was right about it not being good for her to associate with the schizophrenic boyfriend). Do you think many other halfway house inhabitants have experienced this kind of kindness from social workers?

JILLIAN: I can’t speak in general terms, but I know that personally, I’ve experienced all sorts of unexpected kindnesses along my journey of recovery from alcoholism and drug addiction.

10. How do you write? Do you think of a few words and just begin, or do you outline a plot? (One writer, Karen McQuestion, once answered this question by saying that writing was like “remembering” for her.)

JILLIAN: First, I write a terrible, messy, chaotic first draft and then I go back and outline a plot afterwards. I like to let the story tell itself before I start to try to shape it.  Thank you so much Jillian for spending time with us!  You can purchase Pretty: A Novel and other titles by Jillian at Amazon and most book stores.

In many cases, drug addiction interventions are necessary to help convince a patient to seek treatment. You may also be interested in .http://www.rehab4alcoholism.com/

Many thanks for helping me spread the word about this resource. I’ve also attached my website logo. Feel free to upload this along with the above text. Let me know when done, and I can of course link back to your website from Rehab 4 Alcoholism.

I Loved, I Lost, I Made Spaghetti by Giulia Melucci Book Review