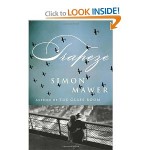 The beginning of Trapeze, a novel by Simon Mawer, contains an explanation: “The French section of the Special Operations Executive sent thirty-nine women into the field between May 1941 and September 1944. Of these, twelve were murdered following their capture by the Germans while one other died of meningitis during her mission. The remainder survived the war. Some of these women became well-known to the public through films and books that were written about them. Others remained, and remain, obscure. They were all remarkable.” Mawer dedicates Trapeze “To the memory of Colette, one of the women of SOE.”

Marian is trained and sent to France by Potter (she speaks fluent French and English) and told, “You must warn your parents that if you accept this work, you will, to all intents and purposes, disappear from their lives until it is all over….and they will have no further information as to your whereabouts.” She is also told that “the chances of survival are fifty-fifty.” Marian is one of the youngest recruits they’ve ever had and she is asked to join the First Aid Nursing Yeomancy (of Great Britain) and knows that everything she does is under the Official Secrets Act, which she signs. “From now on it is not that your work is secret; your whole life is secret” and “You have to appear to be dull and uninteresting. It is a particular skill.” She is informed that she will be watched “all the time to see how you comport yourself” by the Inter-Services Research Bureau.

Marian goes to Scotland for training and her roommate is Yvette, whose husband is dead and who

has a daughter named Violette. Yvette proclaims herself heartless and says “my heart has been turned to stone.” They climb hills, struggle with assault courses, wade through rivers and construct rafts. Marian learns to shoot and take care of weapons, always firing two shots in quick succession to assure a kill. She finds out about plastique, which smells like almonds and can detonate bridges, and time pencils, and “how to inflict the maximum damage in the minimum time.” She is taught wireless telegraphy and Morse code. Then Yvette is posted in Thane Park and Marian goes to parachute school. Before she leaves she dreams of falling “now fast, now slow, like Alice down the rabbit hole. People watched her as she fell.”

Marian learns about the German Armed Forces and “how to think and out-think,” and how to tail someone and know when you are being tailed. She learns encryption, how to deal with interrogation, and how to survive on her own. Finally she is deployed as Anne-Marie and told to be “less striking” so that she won’t be followed by men. Marian is stunned to find out that she must visit an old crush of hers, Clement Pelletier, who has been involved with the making of atomic (uranium) bombs, which surprises her (as does the fact that her scientist brother has also been involved). Trapeze is the code name for her operation.

In Paris Marian is supposed to meet up with Yvette and bring her crystals and valves for a radio set. Her plans immediately begin to go awry and she has to now use some of the many skills that she’s been taught. Alice meets up with Clement and he seems very different to her, with a wife and a child who are spending the war elsewhere. The past meets the present as Marian tries to persuade Clement to go back to London with her, and she also has to deal with what has happened to Yvette.

Simon Mawer writes well about change and about being a young woman who suddenly becomes someone who holds the fate of many in her hands. Marian is very lifelike, as is the dialogue between different types of people, and we realize that it must be a hard task to take a generalized story and make it into a personalized one with which we can identify. Through trying to avoid detection and imprisonment, extreme fatigue and not knowing who to trust, Mawer has made the character of Marian very real to us, and at the same time has brought to life a piece of history.

Trapeze, a novel by Simon

White Sheets to Brown Babies A Memoir by Jvonne Hubbard

The Haunting at Ice Pine Peak by Wendelin Gray