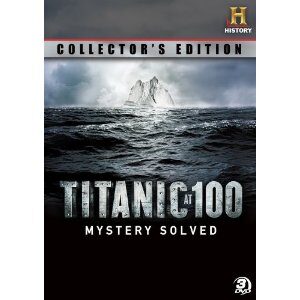 Titanic At 100 – Mystery Solved, Collector’s Edition (released on DVD on 10/9/12) contains two different DVDs – Titanic, The Complete Story (3 feature-length programs on 2 discs, Death Of A Dream, The Legend Lives On, and Titanic’s Achilles Heel) and Titanic At 100 – Mystery Solved (one disc) in an attractive boxed set. If one can imagine it, the Titanic was four city blocks (enormously) long, the “largest ship in the world, designed to be the epitome of style, luxury and safety. Her passengers included the world’s most famous celebrities.” But the RMS Titanic faced disaster four days into her maiden voyage(which began on April 10, 1912) after being called “unsinkable.”

The set is narrated by David McCallum and is unspeakably beautiful visually besides being filled with historical photos and a cornucopia of information. In Death Of A Dream we find out that the passengers on the Titanic in the North Atlantic Sea experienced the ship colliding with an iceberg and then plummeting below the icy waters, taking down a range of people from “the world’s wealthiest industrialists to the humblest of immigrants.” The Titanic passengers shared “a complete trust in the future, utter faith in a world that they believed was always getting better.” The ship was “among humankind’s crowning technological achievements.”

Accounts of survivors like Malvina Dean, who was born in 1912 (and thus a baby on the trip) and whose father decided to take his family to Kansas, in America, to start a new hotel business, and who travelled third class, and Edith Brown Hazeman, born in 1896 and immigrating from South Africa and travelling first class, bring a personal touch to this story. The Titanic was a “microcosm of the whole Western society” and “symbolized, to a very considerable extent, the end of the 19th century and the beginning of the 20th century.”

Mark Twain called this time period “The Gilded Age – heaven on earth.” Technology was king, and as the world changed with people having many new comforts, J.P. Morgan bought up several shipping lines, including White Star (which launched the Titanic), and America was seen as a land of hope for people all over the world, so they wanted to come and live there. As the Titanic was being built in Belfast, Ireland, people would bring their children to see it in its various stages, and finally propped up by timber before it sailed. “Ships were built by hand back then,” says historian and author Don Lynch. The Titanic was to be “the largest ship afloat” with “extra niceties” as “the finest ship on the ocean at that time.” Four collapsible boats and sixteen regulation life boats exceeded all requirements, and J.P. Morgan booked a suite on its first (and sadly last) trip too.

The Legend Lives On tells us about the Titanic’s rugged construction and how when the Titanic left on her maiden voyage to New York officers “paid little heed to warnings of an enormous ice-field directly in her path.” But on April 14, 1912, at 11:40 PM, an iceberg was spotted “looming ahead,” and in two and a half hours the ship went underwater in “a saga that obsesses us to this day.”

Titanic, and we learn that “the doomed liner may have had a fatal flaw design. People “love the idea of the rich and famous going down with the poor and the downtrodden” as a romantic notion, but “the aftermath” tells us of the possibility of a cover-up, and a senator in Washington trying to find out the truth, “a quest to know exactly what happened that night and who, if anyone, was responsible.” We’re told that “the news about the Titanic was already reaching New York while the lifeboats were still in the ocean,” as Don Lynch (author of Titanic – An Illustrated History” notes, and this program deals with the (possible) reasons about why this happened.

The second disc, Titanic At 100 – Mystery Solved, deals with “we don’t even have half the pieces” until “a new expedition searches every inch of fifteen square miles for the first time ever and finds every missing piece.” A complete map of the entire site is made and the Titanic is reconstructed and raised back to where it was before it sank. Did the Titanic have a fatal flaw? is answered as the foremost question of “forty thousand tons of steel tearing itself to bits.” This major effort entailed sonar and robot teams and oceanographers, archeologists, veteran Titanic explorers and underwater experts putting together “pieces that lay scattered over fifteen square miles.” The Titanic was “a structure as big as an eight-story building” and “a beehive of activity” among workers who set out to try to solve all its mysteries. Supposedly “state of the art” and unsinkable, in less than three hours the Titanic sank, and the program Mystery Solved tells us why.

Amazing in its scope and editing and visual beauty, Titanic At 100 – Mystery Solved is a great Collector’s Edition for historians and those mystified and curious about what really happened that can be viewed again and again to retain more and more complex information. See, at your leisure and in the privacy of your home, “what’s out there in the dark – things that never have been seen before.”

Christina Zawadiwsky is Ukrainian-American, born in New York City, has a degree in Fine Arts, and is a poet, artist, journalist, critic and TV producer. She has received a National Endowment For The Arts award, two Wisconsin Arts Board awards, a Co-Ordinating Council Of Literary Magazines Award, and an Art Futures Award, among other honors. She was the originator and producer of Where The Waters Meet, a local TV series created to facilitate the voices of artists of all genres in the media, for which she won two national and twenty local awards, including a Commitment To Community Television Award. She is also a contributing editor to the annual Pushcart Prize Anthology (and has received one herself), the recipient of an Outstanding Achievement Award from the Wisconsin Library Association, has published many books of poetry and has had poetry and fiction in hundreds of literary periodicals. She has reviewed music for Music Room Reviews, films for Movie Room Reviews, Movie Scribes, and FilmSay, and is currently reviewing books and films online for Book Room Reviews at www.bookroomreviews.com while also showing artwork professionally.

Clash of the Titans Blu-ray Review