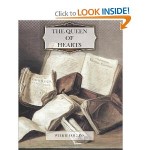 “It’s all over between us,” says a letter from Mathieu, Adele’s lover.  “You gave everything and I took it all but it’s not enough.  Love itself is not enough, I believe,” in The Queen Of Hearts, directed by Valerie Donzelli, a French movie released by Film Movement on 6/5/12.  In a subsequent argument

Adele (played by Valerie Donzelli) threatens to kill herself as she tells Mathieu (Jeremie Elkaim) that he said he’d never leave her. “You see me today as a monster, but one day, you’ll thank me,” the letter goes on, and indeed Mathie does leave.

Adele still loves Mathieu and is beside herself with grief.  She talks to a Spanish girl (Lucia Sanchez) who tells her, “Splitting up is murder.”  Left with little money, Adele visits her cousin Rachel (Beatrice de Stael) who is reluctant to take her in, and makes Adele sleep on the floor, but soon Rachel finds Adele a babysitting job, and everything is better.
Meanwhile Adele has met Pierre (again played by Jeremy Elkaim, who plays all the male roles)
in the park, and he protects her.  He’s a young art student who sketches her and makes certain that other guys don’t take advantage of her.  Rachel comes to like Adele being her room-mate and even gives her a door key and lets her sleep with her in her bed.  Adele periodically breaks into song, singing about her break-up.
Then Adele gets involved with Jacques (Jeremy Elkraim), who takes her to “a very good restaurant” and afterwards wants sex with her continuously.  But Adele keeps remembering Mathieu and what he would have said and done.  However Jacques is the husband of the woman for whom Adele is babysitting, so Adele loses her job.  Finally Adele meets Paul (Jeremy Elkraim) on the steps of Montsouris Park in Paris, and she wants to fall in love with him, but what Paul wants from her is both disturbing and absurd, and eventually Adele sets off on a new journey to New York.
Directress Valerie Donzelli is well-known in France as an actress, and The

Queen Of Hearts is her directorial debut, in which she uses her then-lover Jeremie Elkaim to play all the male roles – Mathieu, Pierre, Jacques, and Paul – because Adele keeps seeing Mathieu over and over again in other men.

Innovative and psychologically intriguing, The Queen Of Hearts is fresh and lively, and brings us a fine new voice in film-making, Valerie Donzelli, that we should watch closely and be hearing from again in the future.