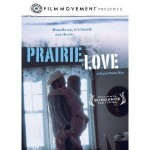 Prairie Love is a film from the U.S. directed by Dusty Bias and released by Film Movement on 11/13/12, and in it a North Dakota vagrant (Jeremy Clark) decides (after listening to self-help tapes about being “manly” for hours on end each day) that he too should “Take what is yours and never look back.” The Vagrant is mysterious (we don’t even know his name or why he’s roaming around North Dakota in the winter, carting a dead reindeer on his truck), as are the other two main characters in Prairie Love (The Girl, played by Holly Lynn Ellis, who’s incarcerated

and waiting to be let out) and Nodak (played by Garth Blomberg, a man whose car breaks down on an icy road and he’s found almost frozen to death by The Vagrant, and The Vagrant proclaims himself Nodak’s “angel” because he says that he saved his life). Everyone’s unexplained past is illusory because it’s untold, no matter how ordinary these people may seem on the surface.

Prairie Love is an extremely unusual film, and we only find out the meaning of its title near the end of the movie (although part of the Prairie Love quote is also intoned by The Girl’s voice at the beginning). One of its’ most important themes is loneliness, and The Vagrant (who is socially inept and an apparent loner and perhaps loser), and Nodak (who has been corresponding with The Girl for the past three years while she’s been in prison), and The Girl (who has also been Nodak’s pen-all but has never met him, and she wants to finally experience intimacy and love) all approach the struggle to be freed from their loneliness in different ways.

The Vagrant, whose dead reindeer keeps being stolen or, as he says, “runs away,” lets Nodak unfreeze in the back of his truck while he rifles through Nodak’s suitcase and wallet. Acting on the suggestion of his self-help tapes, The Vagrant decides to become the supposed writer of letters to The Girl, since he knows that she’s never actually met Nodak (but first The Vagrant goes through a sometimes conscience-less series of events with Nodak). The Vagrant isn’t aware of how he’d look to a member of the opposite sex, rough-hewn and unwashed, much less understanding how The Girl would take to his seemingly vulgar (in his mind, probably “frank”) sex talk. He poses as Nodak, who loved The Girl, but The Girl is shocked by him because she wants romance, “candles and showering together, like in the movies.” The Girl has nowhere else to go (she’s leaving prison for “home,” but home is with him and she’s never been there before, she muses), and the practical Vagrant decides a hotel would be the best place for them (actually a motel). The Vagrant seems to have spent a good portion of his life raiding abandoned prairie homes in upper North Dakota, which director Dusty Bias describes as “Beautiful, old homesteads on strong foundations still furnished with dishes in the sink and slippers by the bed, as if their owners will return home any minute.”

What happens to each of our three protagonists, and is there such a thing as poetic justice? The Vagrant keeps telling both Nodak and The Girl to “Take a deep breath….you need to relax,” mimicing

his self-help tapes as perhaps his only knowledge of real human interaction. And what is love – is it simply caring about someone or is it a strong wish for goodness in the other person’s future? Find out by watching Prairie Love, where history and the past suddenly meet the present in a unique unfolding of three peoples’ lives as they encounter each other by chance. Film Movement’s Short Of The Month is a cartoon animation called A Family Portrait (from the U.K. by Joseph Pierce) wherein a family’s true feelings for each other emerge during a portrait session with a photographer.