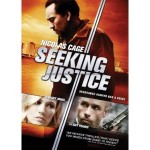 Will Gerard (Nicholas Cage) is happy with his life with his wife Laura (January Jones of Mad Men TV fame), who plays the cello in symphonies, until she is brutally attacked and raped at random while going to her car in Seeking Justice, a film released as a Combo Pack on both Blu-ray and DVD by Anchor Bay Films on June 19, 2012. Approached by a stranger who introduces himself as Simon (Guy Pearce) at the hospital (who seems to know what has happened and is sympathetic), Will finds himself concurring, in his misery, to a revenge plot. In exchange for finding Laura’s attacker Will gives an open-ended promise for help with a “favor” in the future.

“The hungry rabbit jumps” is the code sentence used by citizen vigilantes who try to quell the tide of scum who are raping, beating and mugging their families. Will finds out that certain members of the police force are involved, much to his surprise. But most of all, he is suddenly accused of a murder which he actually never perpetrated.

Like Dustin Hoffman, Al Pacino and Robert DeNiro, Nicholas Cage is one of those quintessential actors with whom everyone can identify since his emotions are continuously apparent through ranges of joy, desperation, fear and happiness. Nicholas Cage always imbues his work with poetry and amazing timing that’s beautiful and rhythmic (no wonder he received an Academy Award for Leaving Las Vegas, elevating and transforming the very difficult subject matter of alcoholism and making it uniquely his own). What

would any of us do in Will’s situation, as his wife fears being touched along with the possibility of being attacked again?

Jones is believable as Will’s light hearted wife, and also strong in her character after the apalling incident. (Cage has said that Jones has tension in her that’s dangerous but that she still has the charm of a child.) Laura is faced with not only her own reactions to being overpowered but she also has to deal with a series of strange behaviors on her husband’s part, which she cannot understand.

Seeking Justice is an action movie, with cars crashing, men chasing each other with guns and danger always at hand. Director Roger Donaldson (who also made The Bank Job) has taken a simple story and brought it vividly to life, engaging us at every turn. It’s a thriller that one cannot help but follow, our eyes riveted on the tension and the action. A moral question also arises: should the law be taken into the hands of the populace when the police and others are unable to protect us? Do we allow our families to be slaughtered like lambs, one by one, or do we ourselves take action?

Special Features contains Seeking Justice: Behind The Scenes, in which Donaldson and Cage discuss their work, and there are interviews with cast members. This is an excellent film for just about any age group (except younger children).

Christina Zawadiwsky is Ukrainian-American, born in New York City, has a degree in Fine Arts, and is a poet, artist, journalist and TV producer. She has received a National Endowment for the Arts Award, two Wisconsin Arts Boards Awards, a Co-Ordinating Council of Literary Magazines Writers Award, and an Art Futures Award, among other honors. She was the originator and producer of Where The Waters Meet, a local TV series created to facilitate the voices of artists of all genres in the media, for which she won two national and twenty local awards,

including a Commitment to Community Television Award. She is also a contributing editor to the annual Pushcart Prize Anthology, the recipient of an Outstanding Achievement Award from the Wisconsin Library Association, and has published four books of poetry. She has reviewed music for Music Room Reviews, films for Movie Room Reviews, Movie Scribes, and FilmSay, and is currently reviewing books and films online for Book Room Reviews at www.bookroomreviews.com and showing artwork professionally.

Movies About Writing That Are So True They Hurt