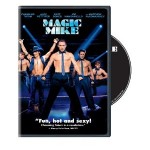 During the day stripper Magic Mike, played by Channing Tatum (with the film released on 10-23-12 in a Blu-ray Combo pack with DVD and Ultraviolet by Warner Bros. Home Entertainment) is in his truck, Mike’s Mobile Detailing, making $20 an hour working roofing jobs (but when does he sleep?). Mike also designs furniture but hasn’t started his own line yet because he’s hosting an All-Male Revue of strippers.

Living in a world that most of us never see, Magic Mike recruits a fellow (out-of-work-now) roofer to entertain Spring Break girls in Tampa, Florida, and dubs him The Kid (Adam Pettyfer). The Kid works props for Magic Mike’s revue and is initiated into this unusual lifestyle where guys drink G (“like getting drunk without the calories”). The troupe strips to songs like It’s Raining Men, and the dance scenes are spectacular (with choreography by Alison Faulk as Channing Tatum steals the show with his extraordinary dancing). The Kid watches all of this, amazed, and then is pushed onstage when another guy can’t go on, taking off his “normal” clothes bit by bit as Like A Virgin plays in the background. Thus he is welcomed into The Crazy Club (where after each dance the strippers jump offstage and go to the girls’ tables) by its participants.

“The man….on the stage…..thousands of women….eyes on YOU.” The Kid is taught the performance tricks of being “the husband that they never had,” “that dreamboat guy who never came along,” and their “liberation,” selling an ideal sexuality that each woman thinks is her own. The Kid lives with his sister Brooke (Cody Horn), a medical assistant who’s disturbed at his becoming a featured performer like Mike. During the day The Kid hangs out with Mike and bevies of girls, and we watch The Kid diving in after Mike into the symbolic river of no return – or is there one?

Are these performances (awash with sex, drugs, drinking and rocknroll) just a way to get girls to pay for sex, or is it high comedic drama so that the girls can have some “fun’? Mike gets paid for his All-Male Revue in nightclubs in cash and isn’t able to get a loan to start his company, so we assume there may be some illegality.

Will The Kid (who lost a football scholarship) drown in a sea of addiction? Is exhibitionism – or is it just high theatrics – a valid life style? and does Mike, who’s 30 years old and has been in the business for six years, want to remain in it forever? Watch Magic Mike and decide for yourself. Brilliant and poignant performances by all, down to the very smallest role.

Christina Zawadiwsky is Ukrainian-American, born in New York City, has a degree in Fine Arts, and is a poet, artist, journalist, critic and TV producer. She has received a National Endowment For The Arts award, two Wisconsin Arts Board awards, a Co-Ordinating Council Of Literary Magazines Award, and an Art Futures Award, among other honors. She was the originator and producer of Where The Waters Meet, a local TV series created to facilitate the voices of artists of all genres in the media, for which she won two national and twenty local awards, including a Commitment To Community Television Award. She is also a contributing editor to the annual Pushcart Prize Anthology (and has received one herself), the recipient of an Outstanding Achievement Award from the Wisconsin Library Association, and has published four

books of poetry and has had poetry and fiction in hundreds of literary periodicals. She has reviewed music for Music Room Reviews, films for Movie Room Reviews, Movie Scribes, and FilmSay, and is currently reviewing books and films online for Book Room Reviews at www.bookroomreviews.com while also showing artwork professionally.