A short Summary of The Urban Boys:

The Urban Boys: Discovery of the Five Senses is an action-adventure story about five teen boys who are mysteriously exposed to a

The story chronicles their effortless interrelations and later exposes the testing of their deep bonds, and introduces the reader to an array of supporting characters who alter the boys’ lives forever. The Urban Boys offers young and mature readers central themes of loyalty, responsibility, honesty, fear, and triumph, which become artfully integrated with cinematic-level action and high drama.

We wonder, will they pass the test of fate, and will each of us pass the test of our very own lives? Intriguing, intelligent, and full of action, The Urban Boys offers a memorable, emotion-packed, thrilling ride for traditional and digital readers of all ages! (first in a series)

The Urban Boys: Discovery of the Five Senses: a Book Review

This is definitely a Young Adult novel. Author K.N. Smith captures High School life very well.The star football players,the closeness of the “Best Friends” and the family life of the characters. I think she (the Author) went out of her way to make a special point here. She wanted to make sure we the reader understood these five boys are just your normal everyday run of the mill High School kids. Their main worries or interest in life were just the same as everywhere else. Homework,Girls,Football and maybe where to go to college . C’mon what more should a guy have to think about? — UH how about SAVING THE WORLD-FIGHTING EVIL?

The Urban Boys: Discovery of the Five Senses is being classified as a Young Adult Paranormal Action Adventure. It hits the mark as far as  Paranormal  Action Adventures go. It’s fun,has lots of action and yes a little mysteriously spooky.Some of it was a little unbelievable. I say this because as I was reading it I was thinking these bad guys just are not too bright.HE ( that’s the 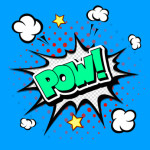 leader of the bad guys) really should arm his Thugs with something more substantial to fight these young kids with. I understand what he Author is doing here but all I could think of as I was reading these encounters was the old TV Batman series.You know the BIFF,BAM POW! during the fight scenes.This is when I decided this would make a great  better said would be a Graphic Novel In the Super Hero Genre,I can see a series based on these five boys with their mysterious powers fighting evil,and I think it would go over great.Judging from the  the book Trailer the dark illustration would be perfect.This is Part one so I’m sure a sequel is on it’s way.BUT! that’s just me, As a stand alone book It’s a great read for older kids with nice family values mixed in. But I think the Graphic Novel is the way to go here.

K.N. Smith is an American author and passionate advocate of childhood and family literacy programs throughout the world.

She continues to inspire students of all ages to reach their highest potential in their literary and educational pursuits. Her creative,lyrical flair sweeps across pages that twist, turn, and grind through elements of paranormal and action-adventure in     diverse exciting, edge-of-your-seat narratives. She lives with her family in California.