I was allowed to review the heartwarming book, “Christmas Secrets in Snowflake Cove,” by Emily Harvale and I loved it.
The Starr family owns and runs the Snowflake Cove Inn and things haven’t really been looking up for the 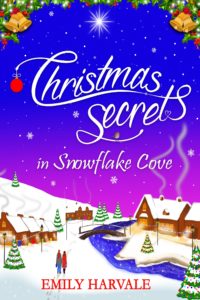 Starr family financially.  There has just been a chance of excellent news that could be the answer to the Starr’s financial Christmas problems.  But, Evie Starr worries about getting the people across the little narrow bridge to the Inn. Actually, Snowflake Inn is attached to Snowflake Cove by  this very small bridge.

Secrets are running and taking over Snowflake Cove.  There is a big chance that T .V personality Zachary Thorn could be coming to their small town and if so, the Snowflake Inn could get a big mention on television, which in turn could help their business.
All the family and friends in this town have things going on and a lot of problems.  Evie is really dreading a phone call from a really bossy and snooty woman that is going to book many, many rooms.  Evie is hoping the other other guests will not be like the grouchy woman.  She is praying they will love the families homemade foods because this could really help them finacially.
Evie’s best friend, Juniper thinks her boyfriend Darren has a secret.  Evie knows he does.  Then there is Raven, Evie’s niece has feelings for Juniper’s brother- who has a secret crush of his own.

But, the biggest secret in Snowflake Cove is the true identity of Raven’s real father.
I don’t want to give the book away by telling how it will end, but I will say, many problems are solved, money isn’t a priority any more and there is a new love in town for a long time.  Raven’s life also gets a whole lot better, as does Junipers.
This book has you really feeling the Christmas spirit.  Love is in abundance and some secrets turn out to be the best ever.   Great book – beautifully written – and you can feel Christmas in the air throughout this story.  It is a must read.

Evie Starr is hoping for more than a sprinkling of magic this Christmas. The family-run Snowflake Inn is virtually empty and the Starr’s financial future isn’t looking bright. But Evie’s gran, Jessie has a secret that might help.

Enigmatic, Zachary Thorn is every woman’s dream. He’s also ex-SAS, so his secrets are classified. The Christmas Special of his feel-good, TV show is set in Michaelmas Bay – until a phone call means he’s spending Christmas in nearby Snowflake Cove.

Evie’s best friend, Juniper thinks boyfriend Darren has a secret. Evie knows he does. And Evie’s niece, Raven is hiding feelings for Juniper’s brother – who has a secret crush of his own.

But the biggest secret in Snowflake Cove is the identity of Raven’s dad.

With snow falling thick and fast and secrets being revealed one after another, will everyone be snuggling up by the fire on Christmas Eve, or are some secrets best kept hidden…?

Having lived and worked in London for several years, Emily returned to her home town of Hastings where she 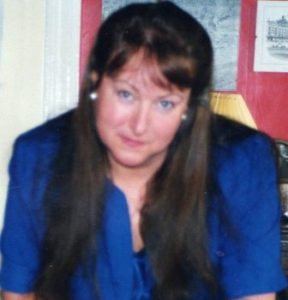 now spends her days writing… and chatting on social media. Emily is a Member of the SoA, a PAN member of the RWA and a Pro Member of ALLi. She’s an Amazon bestseller and a Kindle All Star. Emily loves writing and her stories are sure to bring a smile to your face and a warmth to your heart.

Emily says, “I write about friendship, family and falling in love. I believe in happing endings.” When she isn’t writing, she can be found enjoying the stunning East Sussex coast and countryside, or in a wine bar with friends, discussing life, love and the latest TV shows. Chocolate cake is often eaten. She dislikes housework almost as much as she dislikes anchovies – and will do anything to avoid both.