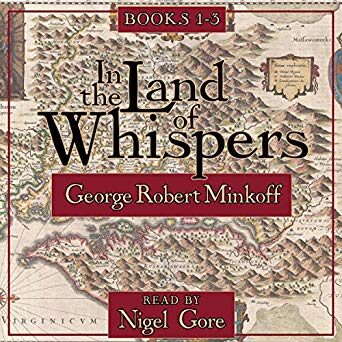 In the Land of Whispers

This audiobook joins together George Robert Minkoff’s three critically acclaimed historical novels about the founding of the first English colony at Jamestown – The Weight of Smoke, The Dragons of the Storm, and The Leaves of Fate.

The Land of Whispers is a visionary epic chronicling lesser-known aspects of the Elizabeth world, including the importance of alchemy to Queen Elizabeth and her court. The canvas is vast, intertwining the life of Captain John Smith, as a narrator, with that of Sir Francis Drake, the great Elizabethan explorer, whose feats 30 years beforehand inspired Queen Elizabeth, and later King James, to dream of an English Empire.
The novels depict the reality of the people who braved great unknowns – treacherous seas, new territory,Jamestown, indigenous populations – to bring with them a utopian ideal that was ultimately shattered on the altar of English custom.

For the record let me first say I don’t listen to audio books very often. For that matter I don’t really like digital copies much either.I don’t use my Nook or Kindle very often. I like a real book in my hands.

That said I received this Audio book The Land of Whispers by George Robert Minkoff read by Nigel Gore. It was actually quite enjoyable. The Listening Length is supposed to be about 57 Hours. I used every bit of that. It took me quite a while to get through it because I would listen to it every night for 30 to 60 minutes as I walked my dog…

So about the book. I do love Historical Fiction. This was no exception. Although I do read a lot of American History I was not all that familiar with the history of the colonization of Jamestown. The Land of Whispers was a very interesting read(listen). The whole thing is basically three stories in one. I don’t mean it’s separated into three book (which of course it is). The three stories are all intertwined. The history of tobacco, the story of Captain John Smith and Jamestown and the travels of Francis Drake.

If you like early American history this is a book you want to read. The story of Jamestown is amazing. How it survived I don’t know. The class system should have killed it .The “Gentlemen” that thought manual labor beneath them was very sad. Would they would rather starve then tend their crops? The ideas of the healing properties of Tobacco. Tobacco as a somewhat status symbol to the Europeans when it was brought back from the Americas. It was all quite amazing.

Also just as intriguing is the tribulations Captain John Smith before he even sailed off to the new world. The way he was treated after everything he did to keep the colony alive. Then there is the “Old Mariner”by the name of Jonas Profit and his tales of Sir Francis Drake.
The Old Mariner is a member of the Jamestown settlement. He is a veteran of Drake’s crew as he sailed and explored the New World that at the time was controlled by the mighty Spanish empire. Profit tells of his experience with Drake the Jamestown Campfire. The exploration of Panama , the Caribbean,his conflicts with the Spanish and being the first Englishman to sail the western Coast of South America. It also covers Drakes return to England and his Queen and his defeat of the Spanish Armada in the spring of 1588.

As you can imagine this 3 book series In The Land of Whispers covers quite a bit. For anyone interested in this time in history The Land of Whispers is a great read. The very beginning of the British Empire,the exploration and settlement of the new world.The interactions with the Native people The Powhatan Confederacy, ruled by their chief known as Wahunsenacawh or “Chief Powhatan”the father of Pocahontas who we also meet in the book.Oh and the search for the fabled Northwest Passage to the Pacific.The brutality of the Spanish to the Native inhabitants of the America’s.The search for the lost settlement of the Roanoke Colony.

A rare book dealer for fifty-two years, George Robert Minkoff is a member of the Antiquarian Booksellers’ Association of America, and the International League of Antiquarian Booksellers. Minkoff serves on the Board of Directors of the Poetry Society of America, currently serving as Secretary. George Robert Minkoff Inc. Rare Books is known internationally for the selling of manuscripts and letters of major American and English writers. Minkoff has written the “Bibliography of the Black Sun Press” and the “Bibliography of the Black Manikin Press,” both standard references in the field. Additionally, George Robert Minkoff has authored the trilogy In the Land of Whispers, a historical novel concerning the English in the New World as Narrated by Captain John Smith  The three volumes are: “The Weight of Smoke,” “The Dragons of the Storm,” and “The Leaves of Fate.”


Disclosure of Material Connection: I received one or more of the products or services mentioned above for free in the hope that I would mention it on my blog. Regardless, I only recommend products or services I use personally and believe will be good for my readers. I am disclosing this in accordance with the Federal Trade Commission's 16 CFR, Part 255: "Guides Concerning the Use of Endorsements and Testimonials in Advertising."

The Adventures of Captian No Beard ; A children’s adventure series by Carol P. Roman