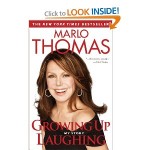 When Marlo Thomas was growing up in her large extended Lebanese-Sicilian (what a combination!) family, she would often hear the men saying, about the women, “Where’s she gonna go?” (meaning that the women couldn’t leave them). Vowing that this would never happen to her, Marlo Thomas became an actress and bought herself her own house (so she’d always have somewhere to go), we find out in her book Growing Up Laughing, My Story And The Story Of Funny, a book so comprehensive and many-layered that we don’t even realize how much we’re learning as we’re reading it, as Ms. Thomas packs its pages with touching accounts of her father, Danny Thomas, and her family, random jokes, and incisive interviews with comedians. Indeed, through this book we come to understand why, besides having received many prestigious acting awards, Ms. Thomas is also an inductee into The Broadcasting Hall Of Fame. As a feminist she wanted young girls to follow their dreams and so produced the well-known book, album and TV special Free To Be….You And Me.

Growing up with Danny and Rose Marie Thomas and a brother and a sister who all loved jokes, comedy was standard fare at the family dinner table, as happened with many other comedians. Joan Rivers had a very funny father and believes that comedy is in your DNA as “you just see the world….differently.” Joan Rivers also tells us “Never trust an audience….the audience decides collectively if they like or don’t like you every time you walk on the stage” and that “personal truth is the foundation of comedy.” George Lopez tells us “I think that being funny is definitely in your genetic make-up, in your blood” and feels that people relate to his Mexican-American poverty and lack of a father figure because it’s true. Don Rickles, whose mother liked to perform and tell jokes, recalls “If it weren’t for my mother, I’d probably still be a very shy kid living in a box. She always made me get up and entertain.” And Conan O’Brien, who came from an Irish-Catholic family of six kids who were always trying to make their father laugh, which was difficult, says that “oppressed cultures do well with comedy because it’s all we had” and is deemed by Marlo to be both a clown and an intellectual.

Conan O’Brien also says “being funny doesn’t necessarily mean being stupid.” Comedians not only have sharp minds and tongues but are always looking for, above all, signs of intelligence, as in Bob Newhart’s story about a comedian approached by a comely young widow who’d recently lost her husband, saw his comedy act and laughed and felt better, and wanted to thank him with a home-cooked meal and “If you’d like to stay over, I have a beautiful negligee I could slip into. We could have a very lovely night together.” As Newhart goes on to recount, “The comedian looks at her for a moment and then says – ‘Did you see the first show or the second show?'” And Kathy Griffin, who saw herself as The Mouse in her childhood, completely picked on and “this little, spindly, freckly pale kid with kinky bozo hair….Never in a popular group or anything” believes that her comedy about celebrities works because “The typical American viewer sees through this stuff so much more than celebrities realize.”

Of course Growing Up Laughing tells stories not only about Rose Marie, Marlo’s mother who had “the voice of an angel and the guts of a prizefighter” and her brothers and sister but also about her father, Danny Thomas, who grew up in an immigrant Lebanese blue-collar family in Toledo, Ohio, and really had an Uncle Tonoose. Danny Thomas didn’t want his daughter Marlo to become an actress and have to deal with the many heartbreaks involved in show business (which made her want to be an actress even more), even though he told Johnny Carson on The Tonight Show (about Marlo’s school average) “This is my kid – 3.8! I have to talk with her through an interpreter!” (Many years later Marlo was able to return the compliment by producing a screen test so that her father could get the lead in the TV sitcom The Practice, after NBC first turned him down, thinking of him as slick and dapper rather than as the character’s grumpy old man.) Scared to death to play the Palladium in London after the British had loved Danny Kaye, his opposite, Danny Thomas tells the audience that “I hear you’re the toughest, most discriminating audience in the world for a performer. Well, I wouldn’t want to be in your shoes tonight for all the money in the world,” and immediately gains their laughter and approval. As a father, he was always giving his children hugs and kisses and infusing them with his own enthusiasm, and he even decided to get off the road (the comedy circuit) after Marlo wrote a school essay stating that by the time he’d always be at home the children would be grown and gone. But staying home resulted in the famous TV series Make Room For Daddy.

Do we find out exactly what this ineffable quality to make people laugh really is, after reading Growing Up Laughing? Not definitively, but Marlo Thomas exposes us to many opinions. Jerry Seinfeld says, “There’s really no rhyme or reason to it,” that “Comedy is like smells. It’s like a cologne counter at a department store. People just pick up the little tester bottles and say, ‘I hate this one, I love this one.'” Whoopie Goldberg comments that “We’re here for a reason. I believe a bit of the reason is to throw little torches out to lead people through the dark.” Chris Rock says, “The guys who are actually the best performers go the furthest,” and that the guys with the best jokes write for other people.

And who is Marlo Thomas, said by Orson Welles to be “a cross between St. Theresa of the Flowers and Attila the Hun”? Still an avid proponent of St. Jude’s Children’s Research Hospital, which her father willed into being and maintained throughout his lifetime, she is certainly not a publicity-seeking, kiss-and-tell flippant celebrity looking for shock value, but a humanitarian who wants us to think, stand up for ourselves – and remember. Growing Up Laughing may well be one of the most unique and valuable books you’ll ever come across, with its out-and-out care for both people as individuals and for the human condition, and also for what may forever help all of us get by in this world – laughter.

Growing Up Laughing, My Story And The Story Of Funny, by Marlo Thomas, trade paperback published on May 3, 2011, by Hyperion Books, 352 pages.

Christina Zawadiwsky is Ukrainian-American, born in New York City, has a degree in Fine Arts, and is a poet, artist, journalist and TV producer. She has received a National Endowment for the Arts Award, two Wisconsin Arts Boards Awards, a Co-Ordinating Council of Literary Magazines Writers Award, and an Art Futures Award, among other honors. She was the originator and producer of Where The Waters Meet, a local TV series created to facilitate the voices of artists of all genres in the media, for which she won two national and twenty local

awards, including a Commitment to Community Television Award. She is also a contributing editor to the annual Pushcart Prize Anthology, the recipient of an Outstanding Achievement Award from the Wisconsin Library Association, and has published four books of poetry. She currently reviews movies for , music for , and books for http://www.bookroomreviews.com.

Book Review : Giant the Lion, the Lion who Could Swim