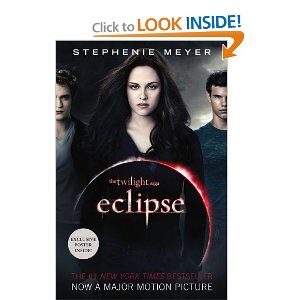 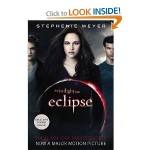 Almost as long as Margaret Mitchell’s Gone With The Wind (which was a writing phenomena in its own time), Eclipse, the third novel in the Twilight series by Stephenie Meyer, once again depends on its sharply drawn characters, especially those of Bella, Edward and Jacob. Etched into everyone’s minds because of the popularity of the movies of the same name, to many, as a visual reference, Bella will always be teenager Kristen Stewart, as she was in my mind as I joined her in Eclipse in her difficulties of dealing with her father Charlie and her mother Renee, applying for college, going out with Edward (with whom she’s reconciled), and longing to help Jacob in his pain at the former withdrawal of her friendship. And, of course, the most important part, fear of her upcoming conversion in becoming a vampire, “the conversion that would make me forever a prisoner to my own thirst,” and her marriage to Edward so that she could spend eternity with him. Other than the conversion issue, the lengthy though easily-read Eclipse does not stray too far from the issues involved in the lives of many teens, parental divorce, trying to choose the right boyfriend and the right college, and possible marriage plans.

With Edward, Bella is always dealing with the mental and the supernatural (Edward can read everyone’s mind other than hers and even tricks her into going to see her mother in Florida when he senses that there will be danger where she lives now in Forks, Washington). With Jacob, with whom Bella decides to still be friends in this novel (since “Jacob had become part of me and there was no changing that now”, and since Jacob periodically becoming a werewolf is still confusing to him), Bella is earthy, walking along the shoreline and watching an eagle dive into the water to catch a fish while Jacob skips stones. Both boys have extensive family situations aiding and abetting them being vampires and werewolves who are at war with each other, even having a line outside the small town of Forks that neither camp should cross. Bella cares about both of them, Edward quite romantically and Jacob as a friend (even though Jacob seems to be in love with Bella). And then Rosalie, one of Edward’s relatives, tries to convince Bella (whose father sometimes affectionately calls “Bells”) to remain human!

Eclipse appears to be simply written (there is no unusual sentence structure or overly-erudite vocabulary), but anyone who has read Stephenie Meyer’s first book, The Host, knows that she is capable of extremely complex thought! In Eclipse intense planning is put into the plot, which is the underpining of the action (and which we can begin to understand from reading the chapter titles consecutively after we’ve read the book!). At every moment Stephenie Meyers knows exactly where she’s leading us and what effect it will have on our emotions. “Admiration was like air to me, Bella,” Rosalie tells Bella during the recounting of the saga of her Depression childhood and young adulthood before she became a vampire. “I was silly and shallow, but I was content.”

Will Bella actually marry Edward (which is different than a vampiric conversion)? Will Bella convert to being a vampire so that the smell of her blood doesn’t keep driving Edward insane (as he attempts vast self-control)? Will Bella stay friends with Jacob even though Edward feels that it’s unsafe for her to be anywhere near a werewolf, especially a werewolf who loves her? (Edward and Jacob were born into their unsual families but at this point Bella still has the choice to remain human, and if Bella becomes a vampire she will be any – in this case Jacob’s – werewolf”s enemy, as Jacob is afraid that Edward will eventually kill Bella if she doesn’t convert, and Edward is afraid that Jacob will kill Bella if she does convert). Will Bella have to leave her high school friends and her mother and father forever without any explanation of her whereabouts? These are some of the questions that are answered in Eclipse, although if you’re a Twilight addict you may have already read Twilight, New Moon and Eclipse and seen all three of the movies! If not, be prepared to pick up a book that you’ll find hard to put down as the plot barrels its way towards Fate, especially the fate of a vulnerable young female teen with whom anyone could easily identify (and reading this book and its predecessors will bring you right in tune with today’s mass culture!). Kudos again to Stephenie Meyer, whose commercial success is well-deserved and whose readership is definitely not limited to teens! She has turned Bella, Edward and Jacob into immortal American icons.

Eclipse, by Stephenie Meyer, the third book of the Twilight series, on sale in paperback by Little, Brown and Co. May 25h, 2010, 640 pages.

Bear Hugging and Cancer Crushing by Anna and Eric Gilcris