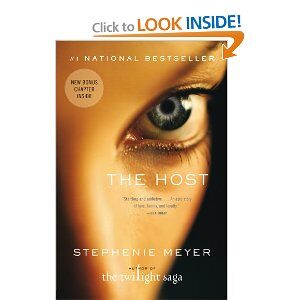 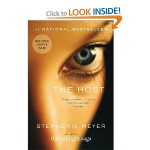 The Host is very different than Stephenie Meyer’s Twilight books. Touted as science fiction for non-sci-fi readers (because it doesn’t contain any space-ship-like technologies), I perceive it more as science fantasy, but nonetheless it is particularly complex. After a few readings of the book I’ve decided that besides the usual we’re-not-talking-about-aliens-we’re-actually-sociologically-talking-about-humans factor, The Host is really about the nature of violence and how it pertains to love. Billed as Meyer’s “first adult novel,” there is a cross-over in which many young adults favor it too.

A group of alien Seekers takes over the Earth and slips Souls into the bodies of humans (kind of like the old concept of alien walk-ins some years ago), re-settles the Earth and wipes out all war, violence and disease. However there are still a few “wild” humans who are radicals and resist the invasion and are trying to survive, hiding in caves in the desert, without having been implanted and outside the sphere of all the others. Melanie, a wild human running from the Seekers with her younger brother Jamie, meets another human, Jared, in Chicago, but later is attacked by Seekers and throws herself down an elevator shaft to escape them through death rather than be taken-over. The Seekers take her to one of their Healers before she dies who not only heals her but implants her with a Soul called Wanderer. Usually the host body’s ideas and emotions slowly die in the Seeker, but Melanie somehow resists and lives on in Wanderer, who becomes sympathetic to her cause. Wanderer is called such because this is the ninth planet where she’s been implanted. A Seeker assigned to Wanderer’s progress senses Wanderer’s reluctance

to oust Melanie (and Melanie is frustrated beyond belief because she can’t control her own body, she can only communicate telepathically with Wanderer) and this Seeker wants to put Wanderer in another body, “skipping” because Melanie is too difficult.

Conflict arises as Wanderer, who dislikes her assigned Seeker, flees and helps Melanie find the tribe of remaining wild humans in their desert cave in the Southwest. Although Wanderer looks like Melanie, Jared (Melanie’s former love), who is in this group along with her brother Jamie, at first believes that Melanie has died within Wanderer. But Jeb, the elder of the tribe who found the cave and first made it his home and then extended it to others, is curious to learn about the invasive alien species and pleads Wanderer’s case among the others. Wanderer becomes known as Wanda, with some loving her stories of other planets and some wanting her dead as a “lying alien” (when she talks about Melanie still being within her). More importantly, Wanderer has fallen in love with Melanie’s memories of Jared (and retains feeling for her brother Jamie), and now both Wanderer and Melanie want Jared, while he is at first still repulsed by the invader.

Over and over Wanderer is confronted with (mostly irrational) human violence, but when attacked in the cave by wild human Kyle “In a fight-or-flight situation, I never had a choice, it would always be flight for me.” Within Wanderer Melanie feels entirely differently, having survived by reacting to violence with violence. Quite a “split personality” – imagine writing this dialogue! Wanderer also has to watch wild human Walt (who was always non-violent) dying of bone cancer in the caves, which makes her realize that there were non-violent humans on Earth and perhaps their planet should not have been taken from them. On the other hand, not being a Healer, she can’t make Walt better, and has to watch him suffering, knowing full well that in her world it’s entirely unnecessary.

One of Stephenie Meyer’s favorite science-fantasy flicks is Gattaca (as is mine), because it deals with the emotions of people pitted into situations in which their freedom is being stolen, and The Host is being made into a movie, now thought to be out in late November of 2010. I won’t say anything else about the plot of this truly-a-tome book in order to let readers find out what happens by reading it themselves, but I will say that I’m curious about the movie whose plot I see as much stronger than that of Avatar, with great potential for similar visuals in Wanderer’s accounts of other planets. Read this book to uncover yet another facet of Stephenie Meyer’s incredible story-telling mind!

The Host, by Stephenie Meyer, re-released in paperback with a new Reading Group Guide copyright 2010 on January 20, 2010 by Little, Brown And Company/Hachette Book Group, 619 pages.
Reviewed by Christina Zawadiwsky
Christina Zawadiwsky is Ukrainian-American, born in New York City, has a degree in Fine Arts, and is a poet, artist, journalist and TV producer. She has received a National Endowment for the Arts Award, two Wisconsin Arts Boards Awards, a Co-Ordinating Council of Literary Magazines Writers Award, and an Art Futures Award, among other honors. She was the originator and producer of Where The Waters Meet, a local TV series created to facilitate the voices of artists of all genres in the media, for which she won two national and twenty local awards, including a Commitment to Community Television Award. She is also a contributing editor to the annual Pushcart Prize Anthology, the recipient of an Outstanding Achievement Award from the Wisconsin Library Association, and has published four books of poetry. She currently reviews movies for , music for , and books for .