The Grace of God a DVD review 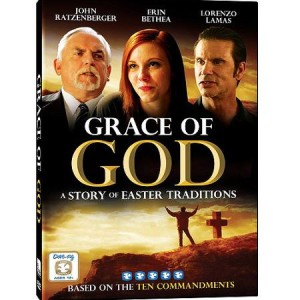 Having lost his faith many years ago, Detective Bill Broadly is called to investigate the disappearance of the local church’s collection plate. As he questions its various church members, rumors swirl as more congregants learn about the theft. When one unexpected church-goer confesses to stealing the funds, the confession resurrects Broadly’s views on God, and helps him see that through faith and belief there really is rebirth and redemption.The Grace of God.

I was a little disappointed with this DVD.First of all John Ratzenberger is advertised as a star of the movie.but he only plays a small part which is too bad because I like this guy. I always liked Cliff from Cheers.Other than that it’s most definitely a family film .It’s supposed to be based on the ten commandments and I guess loosely it is.  It’s really about someone struggling with their conscience while trying to justify a wrong .While saying to themselves doing  the wrong thing for the right reason might be ok. Of course there is also someone that lost their faith rethinking things by the end. Overall it not a bad flick , good for the family and message of right and wrong is certainly there. The acting is also pretty good and worth watching,check it out if you get a chance.

“Disclosure (in accordance with the FTC’s 16 CFR, Part 255: “Guides Concerning the Use of Endorsements and Testimonials in Advertising” Many thanks to Propeller Consulting, LLC for providing this prize for the giveaway. Choice of winners and opinions are 100% my own and NOT influenced by monetary compensation. I did receive a sample of the product in exchange for this review and post.