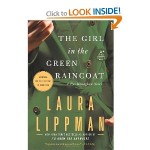 “She had not planned to be a mother, but she had not planned not to be a mother. Her whole life was governed by accidents – her career, her relationship, even this house that she so loved. It made sense that her future daughter would continue this pattern.” Tess, who has an unexpected pregnancy and is confined to bed because of preeclampsia, can no longer do surveillance work for her detective agency. So she gets a pair of binoculars and watches life outdoors from her sun porch, noting that a girl in a green raincoat seems to have disappeared instead of continuing her daily dog walks (and seeing her dog, a greyhound, streak by alone with its green leash!). Tess’s partner, Crow, and her best friend Whitney try to assuage her fears and search the suburbs of Roland Park, being given the small greyhound that Tess had observed by a woman who’d found it and couldn’t keep it. But the dog has no tag or ID.

A call to an upstate New York Greyhound breeder who placed the dog in Baltimore a few weeks ago brings up an owner, Don Epstein, who definitely refuses to take the dog (who is messy and rebellious) back, saying that his wife Carole bought him and that Carole is away indefinitely on business. Tess dispatches Mrs. Blossom, her detective agency assistant, out on the trail to find out more. The information about Don Epstein seems suspicious, so with the help of Dorie Starnes, whom Tess mentored in the past, Tess finds out that Don Epstein has had other wives and girlfriends who’ve died mysteriously.

Delightfully clever and ablaze with current and past film and book references, Laura Lippman’s book allows us to follow Tess’s thought processes as she attempts to uncover what has happened. She brainstorms with Sergeant Harold Lenhardt, who worked on one of the former Epstein cases, and spends time with problematical and odd Dempsey, the girl in the green raincoat’s greyhound, whom she’s adopted. In fact, despite her enforced physical inactivity because of her difficult pregnancy, Tess is constantly surrounded with people, including her father, who wants to build her baby furniture, and Lloyd, Crow’s friend, who studies film. Ms. Lippman also lets us enter the mind sets of other characters, like Tess’s friend Whitney, who decides to do some investigating on her own. Intertwined in the plot are Tess’s fears and hopes for her baby-to-be, with which almost anyone can identify.

Previously serialized in the New York Times and now published in book form, it’s no wonder, reading The Girl In The Green Raincoat, that Laura Lippman has been awarded every major prize in crime fiction (I’m sure also drawing on her work as a Baltimore Sun reporter for twelve years). Unpredictable to the end, as a real-life msytery wold be, and seemingly effortlessly written (simplicity being the hallmark of most great books), this novel had me especially entertained by its protagonist, Tess Monaghan, and noting the “A Tess Monaghan Novel” imprint on the front cover, we know there must be more of these stories! Read The Girl In The Green Raincoat and be immersed in a life similar to your own (focused on love and family) which you will soon rediscover as fresh and valuable.

The Girl In The Green Raincoat (A Tess Monaghan Novel), by Laura Lippman, published by Avon A/ William Morrow on January 18, 2011, 176 pages.

Reviewed by Christina Zawadiwsky
Christina Zawadiwsky is Ukrainian-American, born in New York City, has a degree in Fine Arts, and is a poet, artist, journalist and TV producer. She has received a National Endowment for the Arts Award, two Wisconsin Arts Boards Awards, a Co-Ordinating Council of Literary Magazines Writers Award, and an Art Futures Award, among other honors. She was the originator and producer of Where The Waters

Meet, a local TV series created to facilitate the voices of artists of all genres in the media, for which she won two national and twenty local awards, including a Commitment to Community Television Award. She is also a contributing editor to the annual Pushcart Prize Anthology, the recipient of an Outstanding Achievement Award from the Wisconsin Library Association, and has published four books of poetry. She currently reviews movies for , music for , and books for .

Book Review: I've Never Met An Idiot On The River by Henry Winkler

A Collection of Short Stories and Poems by Gary E. Smith