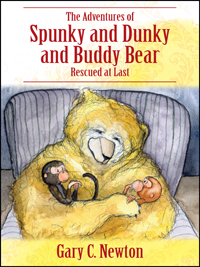 A book about two little monkeys who witness their parents being kidnapped, put in a cage and driven away by their kidnappers to the zoo!  The mom and Dad monkeys wanted to get the bunch of bananas for Spunky and Dunky: the two little monkeys, but the bananas were a trap to lure the parent monkeys into a cage!  The monkeys had always felt safe and had all their needs met by their parents, but the day their parents were kidnaped, their lives were changed forever!  They no longer had the security of having their parents there and now were all alone in the jungle!  Meanwhile, a Canadian bear:  Buddy Bear read his newspaper in his home and read about this story:  the story of the parent monkeys being kidnapped and taken to zoos and two little monkeys left alone in the jungle!  Buddy Bear felt sad by this story!  He was a bear who liked to helped others and given his nature to help, he knew that he had to go and rescue these monkeys!

Buddy Bear took a long trip with a pricy ticket to the African jungle down to the monkey’s homes, found the two scared little monkeys and rescued them!  The two little monkey’s did not trust Buddy Bear at first given their parents experience with the kidnappers, but Buddy Bear and his loving papa bear nature was able to win over the monkeys love and trust!  Buddy Bear takes the two monkeys out of the jungle, onto a train ride, onto an airplane ride into Canada:  Buddy’s Bear’s native country!  The two monkeys discover that Canada is a brand new experience for the two with Buddy Bear to guide them into their new life!  The two bears have a new set of rules set by Buddy Bear to get used to in return for a home and the love of Buddy Bear.  Being curious little monkeys, they have trouble abiding by the rules at first, but they discover the rules are worth it in return for the love of Buddy Bear!

A book to delight kids with colorful pictures.  A book that shows kids about love and family.  This book is a book that could be used to teach kids what makes up a family and also about the importance of rules in a home.

About the Author:  Gary Newtons lived out his childhood adventures at a cabin on a lake in the woods of Canada. Since then he has spent his life serving and teaching children, youth and families. As a professor for 28 years he has trained students to teach and serve others. Gary and his wife live in Minnesota while their three boys and five grandchildren serve in various places around the world.

From Dark To Light A Halloween story by Isabella Murphy