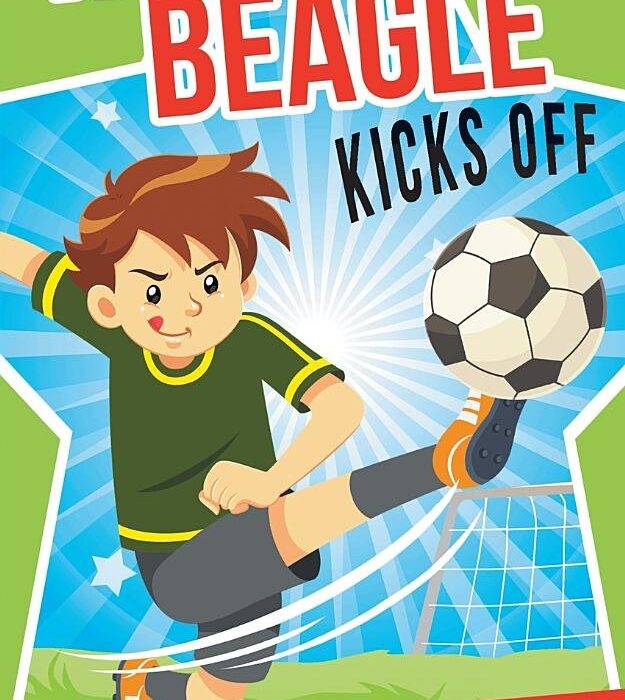 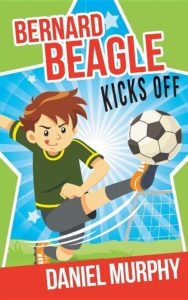 named Bernard who learns a lot about living in many ways.  Bernard has his dreams of playing on his school’s soccer team, but he has to learn how to deal with others both human and animal.
‘Bernard Beagle Kicks Off’ is a book that shows the reader what friendship is really all about and how to make friends out of enemies and learn new skills to boot.  This is a book that brings present day culture to this age group. On page 52 it shows that Bernard is playing his XBox and this is the way that a lot of real life kids play with their friends in this culture now-a-days.  Bernard Beagle Kicks Off is also a story of growing up and on page 81 it describes the beginnings of various social interactions between the sexes and other age groups playing and learning together.  Building relationships and being on a team at some time in the characters lives and the reader’s lives is an important skill for all and Daniel Murphy does this in a fun and creative manner.

Bernard Beagle dreams of playing soccer for his school team. There is just one problem – he is terrible at sports.

Cody Fisher, captain of the Bayview Primary Tidal Waves, is Bernard’s one-way ticket to the midfield.

But following his dream won’t be easy. There’s a savage dog on the loose in Woodland Bay and Sadie Button is wearing her hair in pig tails. Not to mention that witch across the road is doing magic tricks again.

As Bernard pushes for qualification it becomes obvious – he’s going to need a lot more than Cody’s friendship to make the squad.

Daniel Murphy was born in Adelaide, South Australia, in 1991. He grew up with an overflowing bookshelf and would often write short stories in lined notebooks just for fun.

English was his favourite subject at school. When he went to Flinders University to be a teacher, he often focused on writing projects, instead of his assignments.

A Walk Across the Sun book review