The Flowers Of War book review 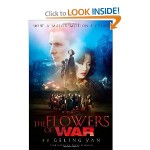 It’s December 1937 and the Japanese have taken the city of Nanking in China. An American priest, Father Engelman, is protecting a group of 16 St. Mary Magdalene schoolgirls in his church, which is supposed to be on neutral ground in the war between China and Japan. The Japanese have set the soap factory on fire, and a group of prostitutes are also seeking shelter at the church, where they are sent to the cellar to be apart from the young girls. Father Engelman doesn’t have enough food to feed everyone.

“The cellar was not a cellar anymore. It had been transformed into an underground railroad. The women had moved some books from the workshop down to the cellar, and had used them to form platforms on which to sleep. Those who had brought bedrolls had spread them over the cots; silk quilts in impossible pinks and greens, ready for a normal business day by the Huai River.”

Then 29-year-old Major Dai of the Second Regiment of the 73rd Division of the Nationalist Army arrives, climbing over the wall into the church grounds looking for a safe place to stay. “The troops had
almost succeeded in driving the Japanese Army into the Huangpu River in the space of a week.” Major Dai is “hit by a bullet in his left side. After throwing a grenade at the Japanese, he pulls himself towards the foreign American church for shelter.”

or 6 thousand Chinese have just been killed) because his church would no longer be considered neutral and he couldn’t continue to protect the schoolgirls. Nonetheless he allows Major Dai and two soldiers (Sergeant Major Li Quan and soldier Wang Pusheng, returning from their own hellish stories with the Japanese) to be helped by having his servants dress their wounds, and he asks Major Dai to surrender his weapon. Major Dai is loathe to do this, but finally gives his pistol to Father Engelman. Then Father Engelman relents and lets the soldiers stay in the cellar with the Chinese prostitutes.

“Three hundred thousand (Japanese) soldiers had escaped into every corner of Nanking, every alleyway, every home, every nook and cranny,” which is what Father Engelman, the schoolgirls, the prostitutes and the soldiers are now facing. The terrible stories of war and of the prostitute’s lives (usually sold into brothels when very young if they’re orphaned or have poor parents) are compelling and

sad. The young schoolgirls are a symbol of what’s pure and untouched in a greedy and sadistic world. Father Engleman tells us, “I have been thinking about this lack of rationality in the East. It gives birth to the most exquisite literature and arts in Russia, Japan and China, yet also the most unthinkable cruelty.” And the sacrifices of Father Engelman and the prostitutes are truly courageous and caring.

The Flowers Of War is based on a true story about the raping and pillaging Japanese of this time (now a film by Chinese director Zhang Yimou, who made Raise the Red Lantern). Author Geling Yan is an award-winning Chinese novelist and screenwriter who has also written The Uninvited and The Lost Daughter of Happiness. The Flowers Of War is an amazing story about a truly terrible time.

Christina Zawadiwsky is Ukrainian-American, born in New York City, has a degree in Fine Arts, and is a poet, artist, journalist and TV producer. She has received a National Endowment for the Arts Award, two Wisconsin Arts Boards Awards, a Co-Ordinating Council of Literary Magazines Writers Award, and an Art Futures Award, among other honors. She was the originator and producer of Where The Waters Meet, a local TV series created to facilitate the voices of artists of all genres in the media, for which she won two national and twenty local awards, including a Commitment to Community Television Award. She is also a contributing editor to the annual Pushcart Prize Anthology, the recipient of an Outstanding Achievement Award from the Wisconsin Library Association, and has published four books of poetry. She currently reviews movies for , music forhttp://www.musicroomreviews.com, and books for http://www.bookroomreviews.com.

Riding a Novel by Cassia Cassitas