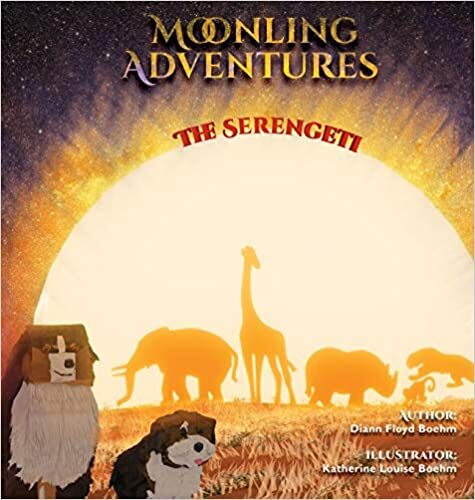 Diann Floyd Boehm   (Illustrated by:  Katherine Louise Boehm Who would like to go and travel the world?  Starting with a special area of the African continent- ‘The Serengeti’. 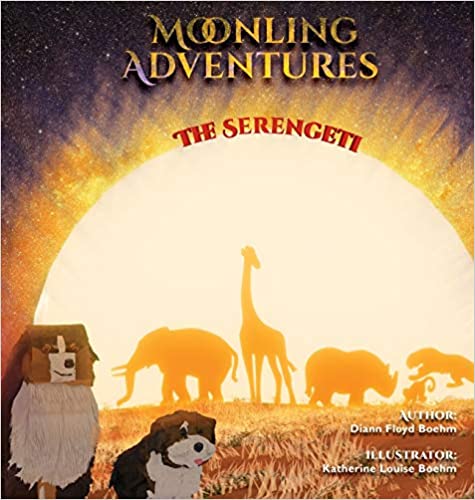 Diann and Katherine Boehm have written and illustrated a children’s picture book about two children and their pet.  This is a first of a series of Moonling Adventures.  ‘The Serengeti’ is the story of the Little Boy of the Moon and the Little Girl of the Moon and their dog Lola and her friend Shadow.  The adventure begins in their spaceship stimulator and watching the master screen and the approaching Earth and as they got closer and closer and seeing land and then the animals of all kinds that are indigious to that area.  Diann has written a story that uses repetition to instill and help with memory skills with the line “Let’s see what else we can see.”  This line is on the animal even pages.  Dian has written in my words a beginning zoology book for young readers.  At the end of the book there is a list of Moonling words that would make for a proper and fun Spelling test for elementary students.  Katherine has drawn pictures of the animals depicting what they really look like in their natural surroundings, as well as the dogs and the little boy and girl of the moon that looks like a sculpture or even papier-mache.  Throughout this picture book and the color scheme of yellows and gold with all the animal pictures did give the reader a sense of what Africa and The Serengeti is really like, as well as maybe wanted to see how the little boy and girl live on the moon.  Where are they going next?

The Little Girl and Little Boy in the Moon, along with their dogs, Shadow and Lola, take readers on an adventure to the Serengeti where they see lots of wild animals in their natural habitats. The adventure begins in the observatory on the Moon where Shadow and Lola maneuver the large telescope in the ‘virtual reality’ simulator that takes off and heads to Earth. The Moonling adventurers explore the wild world of the Serengeti, learning about giraffes, hippos, hyenas, and more! Climb aboard and see what the latest Moonling Adventure has in store for you