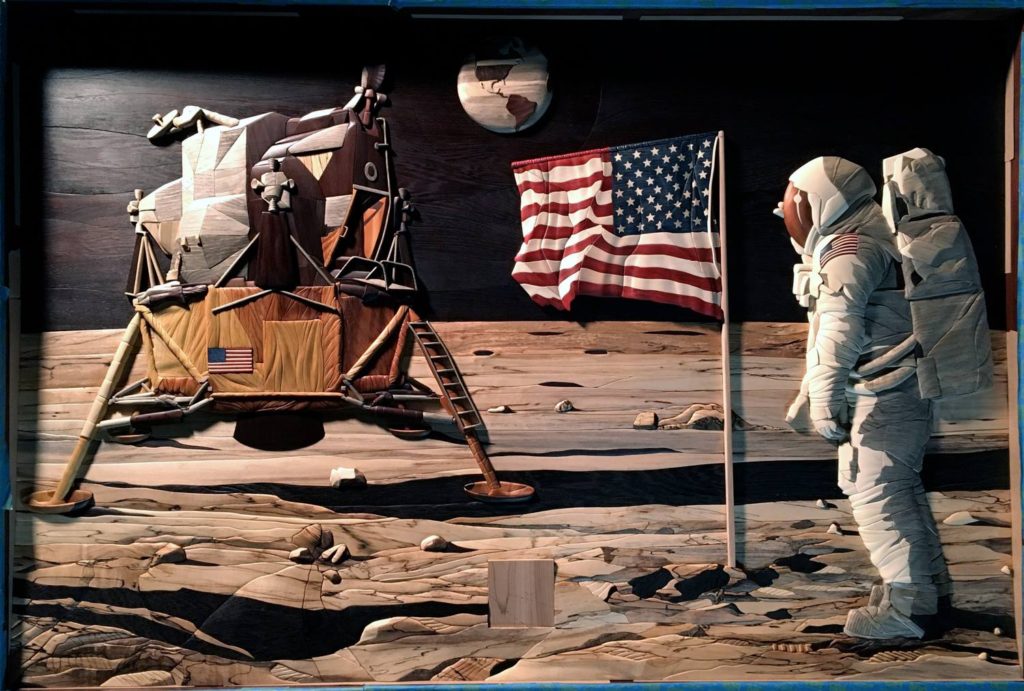 When you think of space missions, Moon Landing , astronauts sipping Tang—or maybe Apollo 13’s oft-quoted appeal to Houston—might come to mind. But when NASA called Judy Gale Roberts in August of 2018, they had a different sort of mission for her. In advance of the 50th anniversary of the Apollo 11 moon landing (July 20, 2019), the space agency asked her to design an intarsia scene that not only pays homage to the event but also contains real pieces of “moon wood.”

First, some background. The Apollo 14 mission, launched in 1971, marked the beginning of a little-known collaboration between NASA and the United States Forest Service (USFS). It took root when astronaut Stuart Roosa, a former USFS smoke jumper, brought over 500 seeds with him to see if a trip to space would change the trees that grew from them. (It didn’t.) Although Roosa had fastidiously organized them based on species—sycamore, sweetgum, loblolly pine—the package tore in transit, so when the USFS eventually germinated these seeds and sent them to key places around the world (among them the U.S. Space and Rocket Center in Alabama, the Swiss Transport Museum in Switzerland, and the White House), their identities were a mystery.

The Kennedy Space Center in Fla. received one of these mystery plants, which turned out to be a sycamore. Planted in 1976, it grew to maturity but fell in a 2017 hurricane. NASA carefully preserved the wood and sent several pieces to Judy. (To her delight, they were all beautifully spalted.) Then she set to work devising a pattern, using official photos from the first moon landing for reference. 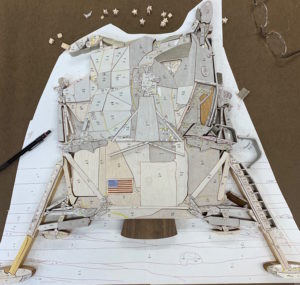 “I changed the piece slightly as I went, because sometimes you sand something smooth only to find that the color didn’t end up like you wanted,” said Judy. “This happened with the eagle’s face, the stars, and the flag. We ended up recutting about 40 pieces total.”

“Judy has been totally focused on this,” her husband Stephen added. “It’s a wonderful project; it has changed our whole lives! Judy usually loves to get outside and dig in the dirt this time of year, but this spring, she said, ‘You’re going to have to plant the jalapeños yourself. I want to make this perfect.’”

The finished product speaks for itself. Comprising over 1,300 individual pieces (the smallest of which is 1/4″ square), a dozen wood varieties, and the fr 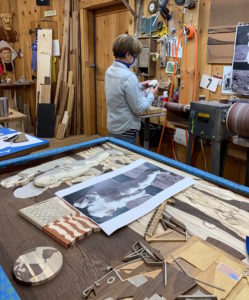 uit of 1,000+ shop hours, Judy’s creation almost seems to breathe on its own. And, as if cutting and shaping were not enough, each piece of the 53″ by 56″ scene received three coats of polyurethane and five coats of UV-resistant varnish before being glued in place. Slices of moon sycamore make up the flagpole and the laser-engraved sign at bottom center.

On the first week of May, Judy and her team said goodbye to the completed piece as it traveled from her Tennessee studio to its new home at the Kennedy Space Center museum in Cape Canaveral, Florida, where it will hang on permanent display.

“It felt like letting your child go to fulfill the next exciting part of her life,” Judy reflected. “There were days when I thought, I’m tired, my fingerprints are all sanded off, and I can’t do this anymore! But those moments make it that much more satisfying when it’s complete.”

The World in a Rainbow