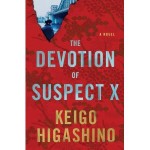 Not many detective stories begin with most of the details of the murder, follow the investigation, and then lead you to the true meaning of the event as does The Devotion Of Suspect X. Almost deceptively simple in plot, later what goes on reveals itself as complex as an unlikely genius masterminds clues for others to stumble upon. Single mother Yasoko Hanaoka is plagued by her ex-husband Togashi, who wants her back after a divorce that occurred five years ago, to once again brutalize her (even physically with blows), but when she says no he takes money from her meager earnings instead. Her daughter, Misato, feels terrorized by Togashi as well, and he is her stepfather, not her real father.

Suddenly an unlikely hero, the placid math teacher who lives next door, Ishigami, comes to their aid. Police and detectives keep trying to break down everyone’s alibis (after Togashi is murdered), probing Yasoko’s past as a nightclub hostess and current position as a lunch-box salesgirl. Nothing seems to give until one detective talks

to an old friend of his, Yukawa, who attended the Imperial University with Ishigami, where he was as brilliant at physics as Ishigami was in mathematics.

However entirely post-modern The Devotion Of Suspect X is, it carries to us Westerners a whiff of what it must be like to live in (to us) exotic Japan, where such items as kotatsus, heated tables, are common. The aspect of domestic violence is treated as a shame that must be kept from the world (very unlike our Burning Bed rendition). However the thought of an oppressor, angered to have lost his charm and wealth by having been discovered embezzling funds and thus fired, trying to fault and hold onto Yasoko, is more than plausible.

The entire story is fraught with tension: will the murderers be found out? and how? And will Yasoko and her daughter finally be able to live a happy life, with Yasoko marrying a conventional businessman, Kudo, who really cares about them?

The Devotion Of Suspect X is a book about almost unbelievable sacrifice paired with sharp thinking and curtains of delusion that keep us always musing and wondering, too. Never grisly or gratuitously violent like many other stories of its kind, the book affords very in-depth psychological studies of a number of human personalities. One of the best mystery stories that I’ve ever read (where you keep thinking that you have the entire answer, but you don’t!), and I would highly recommend it!

The Devotion Of Suspect X by Keigo Higashino, published on February 1, 2011 by Minotaur Books, 304 pages.

Brave Like Mom by Monica Acker and illustrated by Paran Kim