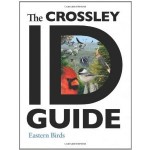 Author Richard Crossley has been birding since the age of seven, and his book reflects his great love of the outdoors and of birds. His aim is to use new technologies to bring reality birding to a vast audience. Crossley’s book features large scenes (640 in all, taken from more than 10,000 author photos). Each shows birds from any viewpoints, near to far, in all the glory of their plumages and in varied behaviors. You can also see what a bird would look like close-up and in many stages of flight, and how its appearance changes with distance.

Maps show us where the birds live and where they migrate. Birds are viewed as we’d see them naturally in the field. The well-written text tells us how to identify birds (given all their individual differences) and how to enjoy their lovely feathers and looks.

The first of a new generation of nature guides, I found the Crossley ID Guide To Eastern Birds absolutely fascinating. The color photos of landscapes and comprehensive texts can be pored over for hours and hours, and the book is set up for easy learning. Additional information can be found at

The Bird Topography and the Introduction help us to use the book by explaining its organization and how to be a better reader by recognizing habitats, behaviors, species, size, color, flight and plumage. Crossley encourages taking many hand-written field notes, as the British do, and realizing that individual birds may vary slightly, so one should certainly believe one’s eyes!

An absolutely attractive (and intrinsically artistic) coffee table book for the browser while at the same time containing all the necessary information for any birder or avid learner, small children all the way up to their grandparents will love this book! One can feel Crossley’s excitement on every page as the field photos bring the birds to life more than any drawings could. Seeing birds from many different angles (e.g. flying as seen from below) is so very different from other books of this type. The largeness of the book is imposing also.

The Crossley ID Guide To Eastern Birds would make a beautiful gift that anyone would love to receive (at a very affordable price, in these stringent economic times). Birds are very similar to humans socially (they live in flocks, mate and stay in pairs, and vocalize to each other as they take care of each other and their entire communities), and seeing these remarkably-composed photographs underscores this point. Most people would find this serious compilation that’s housed in beautifully composed visuals very hard to resist, whether you’re a birder or not!

Of Dolls And Murder DVD Review

An Interview with Andrew Crofts