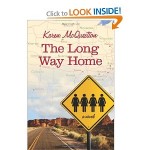 The Long Way Home, a novel by well-known author Karen McQuestion, is vivid, witty, fast-paced, and mentally and visually engaging. It is about grief (three women from the Good Grief group take an older woman on an important road trip from Wisconsin to Las Vegas), but it is really about what the living do to assuage their grief, which is to take action.

The characters are distinct and personable. Maggie, whose partner of ten years died from a heart attack (and she’s shocked to discover facts about him that she didn’t know), was not in love with Brian at the end but “Even as her feelings for Brian faded, her love for his son, Troy, grew until it became bigger than anything she’d ever experienced. Sometimes when he had a bad dream, he’d call for her from his room and his cry of ‘Marnie’ was so frantic and blurred that it sounded just like he was saying ‘Mommy.’ The frist time it happened, a swell of love for the boy imprinted on her heart. To leave Brian would have meant leaving Troy and that was unfathomable. She’d been his substitute mom since he was four, and he depended on her.” But now Kimberly, Troy’s real mother, has taken Troy away to Las Vegas, and Marnie gains the courage to go there and try to bring him back (with help from a woman in her grief group, who even offers to drive there with her, since she fears flying). “It was like the last ten years of her life were letters on a dry erase board and Kimberly wiped it clean.”

Jazzy, young and blonde and pretty, is drawn to the group through a series of psychic feelings (which her grandmother had too, when she was alive). Her lot is a different one, meant to help others, and everyone is curious about it and glamorizes it. “Do the thing you long to do and become the person you’re destined to be,” Jazzy writes on the blackboard to inspire all the others. But voices are constantly bothering her with their “spiritual stalking” as she tries to determine what she should do. “She knew from experience that people were initially fascinated but very soon would start to treat her differently. They wanted things from her she couldn’t give. It was a cursed blessing, or blessed curse, depending on your point of view.”

Rita offers to drive everyone in her husband’s pride and joy, his Crown Victoria car. Rita’s daughter Melinda had been murdered (and she is convinced that Melinda’s boyfriend Davis, who disappeared soon afterward, did it), and Rita can’t bear to live without her daughter. “She hadn’t been herself since Melinda died. Time and again she’d tried to get back to being the person she was before the murder, but even the best moments were a charade. Like she was going through the expected motions of life. With each passing month she thought it would get easier, but that didn’t happen. Each day was one more day without Melinda.”

Laverne, an older lady who lives on the first floor of a duplex where Marnie now rents the second floor, had been reclusive since her husband died three years previously. Jazzy persuaded Laverne to go on the road trip by saying that lives would be changed on this trip. Laverne had never been outside of Wisconsin before and marveled at the landscape changes in the various states they drove through on their way to Las Vegas. “So much was new to her. And here she thought she knew so much of the world, having raised three kids, being married for forty-two years, and having a long career as a payroll clerk in the accounting department for Duffy’s Food Service. But really, all those years of all those experiences were only the tip of the iceberg compared to everything that was beyond the state line. Why hadn’t she ever taken a road trip before? Possibly because when the kids were growing up, they vacationed up north, like everyone else she knew. A rental cottage on a lake was heaven. There was something relaxing about being on the water, and the kids loved fishing and swimming. No, she didn’t regret it. What she regretted was spending the last three years cooped up at home. After her husband died she’d come undone.”

Through annoyances at each others personality traits, conflicts, car break-downs, Jazzy’s foretellings about what they should do, and encounters with motorcyclists and robbers, stabbings and very long stretches of driving, the four women help each other change so that they can set forth, each to a better future and each not the woman she’d been before. Karen McQuestion’s ease in writing convincing dialogues makes us feel as if we’re hearing conversations between real people, and Marnie, Jazzy, Rita and Laverne also become just as real to us as you or me. An excellent book that delves into the need for individuation, justice, social interaction and how people can really help each other, The Long Journey Home has my highest recommendations and is Karen McQuestion’s best book yet (with more to come, I’m certain, in the future!).

Christina Zawadiwsky is Ukrainian-American, born in New York City, has a degree in Fine Arts, and is a poet, artist, journalist and TV producer. She has received a National Endowment for the Arts Award, two Wisconsin Arts Boards Awards, a Co-Ordinating Council of Literary Magazines Writers Award, and an Art Futures Award, among other honors. She was the originator and producer of Where The Waters Meet, a local TV series created to facilitate the voices of artists of all genres in the media, for which she won two national and twenty local awards, including a Commitment to Community Television Award. She is also a contributing editor to the annual Pushcart Prize Anthology, the recipient of an Outstanding Achievement Award from the Wisconsin Library Association, and has published four books of poetry. She currently reviews movies for , music for , and books for

EcoMasters  A Planet in Peril  Book One The Pathfinder