The costs of drunk driving” the DUI 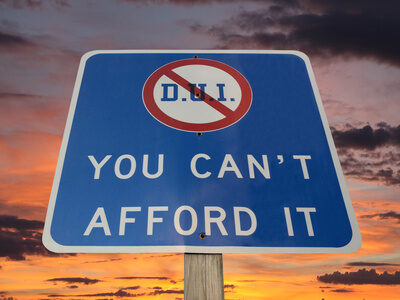 Celebrations should be a part of everyone’s life, whether it’s celebrating a birthday, the end of a work week, a promotion or any other event, minor or major. Unfortunately, celebrations all too often become lamentations when drinking is combined with driving. Although it is illegal in all 50 states to operate a motor vehicle when under the influence of any substance, the legal BAC, or blood alcohol content, varies by state. Some states have a zero tolerance law so any alcohol in the blood is considered driving under the influence.

DUI’s are expensive. There is no avoiding that fact. Not only will there be fines and penalties, which may include the temporary loss of driving privileges, but there will be an arrest record. Anyone who needs a valid driver’s license as a condition of employment may jeopardize his or her job by receiving a DUI; for several years, he or she will not be able to obtain another job where driving is required.

Many states now require recipients of a DUI to complete a DUI class; the length and depth of the course will depend upon the severity of the citation and the number of previous DUI’s. The classes are expensive. As well, the court may order an ignition interlock device, which is an expensive breathalyzer that prevents the driver from starting the car if he or she has consumed alcohol.

Of course, if there is personal injury, property damage or one or more fatalities, the consequences increase exponentially. Many

times, when bodily injury occurs as a result of a DUI, whether it is injury to a passenger, another driver or a bystander, the driver will serve time in jail. This is also true when property damage is involved. As well, the court will usually order that restitution be made to the property owner and/or the victim or his or her survivors.

Often, depending on the number of previous DUI’s received, the driver may permanently lose his or her license as well as the vehicle involved. Many states impound or confiscate the vehicle used in a DUI. If the vehicle is impounded, there will be substantial impound fees to redeem it.

Unfortunately, both for the driver and the victim(s), if one or more fatalities are the result of a DUI, the driver will more than likely spend a considerable part of his or her future in prison. Truly, a DUI with a fatality is the end for both the victim and the driver. What may have begun as a celebration will mark the end of life as the driver knows it.

Most times, drivers do not intend to commit a felony when they get behind the wheel after they have had a few drinks. However, one of the effects of alcohol is impaired judgment. This is definitely a situation where a little planning can go a very long way; a designated driver should be mandatory for anyone planning to drink away from home.

Alternatively, it is much cheaper to spend 20 dollars for a taxi.

Christopher Steven is passionate about spreading awareness and encouraging safety for all communities while working with a Tulsa Criminal Defense Attorney Law Firm of Gorospe & Smith in his own community to educate and promote safety and accident prevention.

What Makes a Good Children’s Book?

Is it better to read free ebooks online than spending money on a hardcopy?

The Teensy Weensy Virus: Book and Song for Preschoolers a Giveaway