I spent 22 years in the ashrams and six years on the personal staff of Maharishi Mahesh Yogi, founder of Transcendental Meditation (TM). While the Beatles enjoyed halcyon days at the guru’s ashram in Rishikesh, India, from February to April 1968, their creativity blossomed, and they wrote about 40 songs, including those on the “White Album.“

Who was “Sexy Sadie”?

Ringo and his wife Maureen left the discomforts of the ashram after 10 days, to return to their two babies. Paul and Jane Asher left after five weeks to fulfill Jane’s theatrical commitment in London. John and George stayed on. But on April 10, these remaining Beatles left Maharishi in a huff for three reasons. 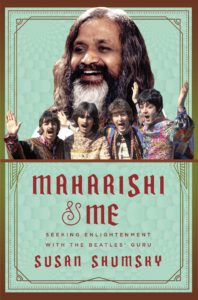 celibate) had made a pass at Rosalyn. “Magic Alex” managed to talk George and John into leaving Rishikesh because the evil Maharishi might hex them with black magic.

While waiting for taxis to extract them, John took out vengeance, writing the song “Maharishi,” peppered with vile expletives. When George objected, “You can’t say that. It’s ridiculous,” John changed the lyrics. Instead of “Maharishi,” “Sexy Sadie” became the seductress.

Who was “Dear Prudence”? On The White Album

Mia Farrow’s sister Prudence Farrow had abused drugs and alcohol as a teenager, and in Rishikesh, she meditated day and night and wouldn’t come out of her room. Maharishi asked Beatles John and George to check on her. She remembers them bursting into her room and singing to her. But she just wanted them and their noisy music to disappear so she could meditate.

Prudence suffered a terrifying psychotic episode at the ashram, but Maharishi helped her return from the abyss. She become responsive and happy. Just before leaving Rishikesh, George sent Prudence a message that John had written a song for her—”Dear Prudence.”

Who was “Bungalow Bill”?

Richard A. Cooke III (Rik) dressed and looked like a textbook Anglo-Saxon Ivy Leaguer. He and his mother Nancy Jackson took a tiger-hunt safari and afterward detailed their exploits to Maharishi, while the guru glared silently at Nancy. Maharishi questioned Rik, who answered he would never kill another animal. When John Lennon piped in, “Don’t you call that slightly life-destructive?” Nancy retorted, “It was either the tiger or us” [after eight elephants drove the trapped tigers into the “kill zone”?]. John described the song as “written about a guy in Maharishi’s meditation camp who took a short break to shoot a few poor tigers, and then came back to commune with God.”

“Revolution” originated from “The Maharishi Effect,”—the guru’s theory about world peace. He often said, “For the forest to be green, the trees must be green; for the world to be at peace, the people must be at peace.” He believed peace could never be achieved through politics or treaties, but it could be attained with a large percentage of the population meditating. He demonstrated this theory through scientific studies.

At first Paul reported he was inspired to write “Blackbird” when he heard loud crowing in the early morning at the ashram. However, years later he ascribed deeper significance to it, paralleling the lyrics to the Civil Rights Movement.

“Everybody’s Got Something to Hide Except Me and My Monkey”

This song’s lyrics consisted of Maharishi’s favorite expressions and portrayed meditation experiences. Frequently, Maharishi would say “Take it easy; take it as it comes,” and “it’s such a joy!” Whenever he beckoned anyone to meet with him, Maharishi would say, “Come, come,” or “Come on.” John revealed the “monkey” was Yoko Ono. “

George’s “Long, Long, Long” was about tears shed in losing and finding God.

One of Maharishi’s lectures about the unity of nature and mankind touched the BeatlesBeatles  deeply, inspiring “Mother Nature’s Son” by Paul, and “Child of Nature by John,” which mentioned Rishikesh in the lyrics (its melody was later released as “Jealous Guy”).

Maharishi & Me: Seeking Enlightenment with The Beatles’ Guru by Susan Shumsky is out now, available on Amazon