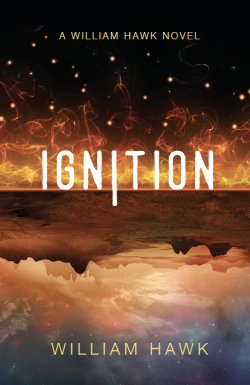 On his sixteenth birthday, William Hawk awakes like any other morning – a teenage boy focused on girls, cars, and food. But, before he can even finish eating, William’s Change Agent III status activates, and his responsibility to save Earth from evil begins.

Just months before, on her sixteenth birthday, Grace’s Change Agent III status reveals an appalling truth: her malevolent twin brother is the Dark Master reincarnated. After years of being brutalized by her brother and deemed crazed by her family, Grace finally encounters the opportunity to free herself from her brother’s terror and help William save her planet.

While seven of the ten worlds within the universe have defeated evil, none have combated the Dark Master directly. With the help of family, Native Americans, and friends from Earth and beyond, William must discern his new, pre-bio memories and conquer his pre-bio mistakes to deliver Earth toward the freedom of final ignition.

First of all, love the cover. It might have to go on one of my all-time favorite covers list! Honestly when I got it, the premise was so interesting and I loved the cover so much, I knew it had to be good. Yes, yes, I admit to judging a book by the cover. Shame on me haha.

There’s pretty much no easing in to this story, action starts on the first page. Granted, it doesn’t pick up to harrowing levels until a bit later, but you don’t have to worry about a slow start. You can see the conflict of William thinking he’s insane but also knowing that something is different and important.

One thing that I thought was a bit interesting was how easily his family seemed to accept things, even if they were skeptical. I mean, if your kid started claiming he’d been seeing visions and other weird stuff, you’d probably think that they may have taken something to give them a reaction.

The themes of this book are very deep, which is unique for a young adult book. Yes, many books and series have general overarching themes, but this one made you think and if you thought too much, your brain could hurt. It will certainly be interesting to see how the next book follows up the first!

“The Powder Room” by Gregory Montoya