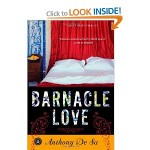 In Barnacle Love, protagonist Manuel truly hopes to establish a new life in a new land, so he leaves Azores (a Portuguese Island) where he’s been the apple of his mother’s eye, and goes off with the fishermen, leaving behind his nuclear family and risking his life. He becomes involved with Pepsi, the daughter of fisherman Andrew who’s saved him from the sea, and likes her although she has a wooden leg, but recoils in horror when he learns the secret she’s been keeping from him. He chooses another “barnacle” to wed, Georgina, who must leave her own land and emigrate to Toronto with him.

At times imbued with magic realism (as Manuel calls a huge grouper fish he’s seen Big Lips) and the Portuguese “saudade” – “a longing for something so indefinite as to be indefinable….all things born in the soul that can only be felt,” author De Sa’s father also emigrated to Canada from the Azores (although De Sa’s fictionalized book was researched and taken from the histories of many families). In A Note From The Author he writes: “My father immigrated

to provide a better future for himself and eventually even parents and siblings…..For my father, the voyage did not devastate his identity like it had for so many others….He refused to become a stranger to himself and chose to embrace his new life in Canada,” and, describing a trip the author took with his mother to Azores, “that I discovered being Portuguese was in me – something that could not be forced or taught, and could not be so easily severed.”

However, our adventurer Manuel is told by Mateus from whom he rents a room, “a man who truly has nothing doesn’t smile” and “Don’t let the idea of a dream conquer you.” So Manuel sacrifices and with his wife, Georgina, and a son, Antonio (named after his own father whose golden crucifix he still wears), when is mother is dying he returns with them to where he was born, to see his mother for the last time. His mother says to him and his son, “voce veio de mim,” – you are made of me. And the next day, after not having seen her son for so many years, she dies.

Barnacle Love is divided into two parts, Terra Nova (Manuel’s journey) and Caged Birds Sing (in the voice of Manuel’s son Antonio, who talks about his family’s life in Canada and what a burden it is to carry his father’s unfulfilled dreams). Antonio tells us about how Manuel first worked at a hospital, then with a friend on a failed goat cheese business, and then he bought a truck, on the side of which was written MANUEL AND SONS HAULING CO. Antonio also talks about his own life, about how he longs to be the Angel Michael in a church/school procession, how a shoeshine boy he knows is preyed upon by a stranger, how his father butchers a pig and how his life would probably have been very different in Azores.

Manuel starts drinking heavily and Antonio is embarrassed by him, while his mother takes in sewing and goes to faith healers to try to change their situation. His father loses his driver’s license and doesn’t work for nine months. Eventually Manuel becomes delusional and they have to send him to the hospital but he ends up in the Toronto West Detox Centre, after which he doesn’t drink for a year.

De Sa writes, “Manuel is any immigrant, always reaching for a dream he cannot have,” and that his book is about “the disappointment inherent in the choices made by a father and the expectations he places on his son.” I found Anthony De Sa’s fictional debut compelling and unique (especially in the vividness of the writing in Terra Nova where Manuel is first in Azores and is trying to go to Toronto with his dreams). Many immigrants’ children have experienced their parents not acquiring what they thought they would, with the additional travail of having to be caught between two worlds, the old one to which their parents cling and the new one which is the only one they themselves know. A great read that I’d recommend to anyone!