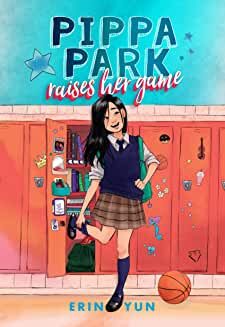 Erin Yun
What is middle school? It is a place where we begin to understand who we really are.  ‘Pippa Parks is the main character who is an Asian-American trying to fit into her society at a new school.  She thinks that she has to 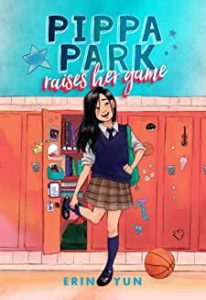 prove herself to her old and new friends from her old and her new school.  Park does have friends, as well as a best friend by the name of Buddy that she wants to keep, but not sure if he will still fit in with her new ones at the new school.  Park just wants to fit in anyway she can find a way to fit.  Pippa Park is a character who needs some help with her schoolwork if she wants to stay on her basketball team, and she finds out that her tutor could be one way, but not sure how.  Pippa slowly does find a way to fit in, but as adolescence goes issues will arise for her.
‘Pippa Park raises her game’ is a story of the rich and the poor and figuring out various emotions and what really makes a ‘real’ friend.  Pippa has a friend named Buddy and her teammates, as well as Eliot and his brother.  Pippa is not wanting to let her new friends know her family and where they live for she feels she will be different enough in other ways.
This is an adolescent novel that will teach about diversity in many of its’ forms and it is a story of feeling acceptance for yourself and others for we all have our similarities and differences.  School counselors and social workers could use this novel as a start to a book discussion group that discusses various aspects of learning and how to socialize at this level of development using the adolescent language of the day.  In the physical writing of the book I had a feeling the it could have started the way it ended with the last sentence “I just felt like me:  a little awkward, a little too enthusiastic, a little uncool.”  This is how I felt when I started middle school.  One lesson that one could take from the story is Do not feel like you have to change yourself to fit in anywhere.  There were many scenes in the book that would and could remind students as well as parents that middle school is hard, but survivable.

Life is full of great expectations for Korean American Pippa Park. It seems like everyone, from her family to the other kids at school, has a plan for how her life should look. So when Pippa gets a mysterious basketball scholarship to Lakeview Private, she jumps at the chance to reinvent herself by following the “Rules of Cool.”

At Lakeview, Pippa juggles old and new friends, an unrequited crush, and the pressure to perform academically and athletically while keeping her past and her family’s laundromat a secret from her elite new classmates. But when Pippa begins to receive a string of hateful, anonymous messages via social media, her carefully built persona is threatened.

As things begin to spiral out of control, Pippa discovers the real reason she was admitted to Lakeview and wonders if she can keep her old and new lives separate, or if she should even try.

Debut author Erin Yun grew up in Frisco, Texas. She received her BFA in English from New York University and served as president of its policy debate team. This experience came in handy for her job as the debate consultant for the Tony-nominated Best Play on Broadway–What the Constitution Means to Me. Erin is a member of the Society of Children’s Book Writers and Illustrators and has written reviews and articles for BookBrowse. She currently lives in New York City, and yes—she used to play basketball as a middle grader!

The Psychology Of Wealth book review

Gravity Is Heartless : The Heartless Series by Sarah Lahey