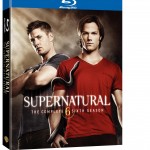 Season six of Supernatural focuses on the brother’s relationship as they battle Heaven and Hell. The two brothers spend endless amounts of time traveling together, encountering demons and a trench coat wearing angel. If given the choice, would you choose your own sibling to help you in this battle, or would you chose someone else. Why?

Often when we move out into world we settle into our own lives and can lose touch with the sibling relationships that helped define and form who we are as young people. However, for me, I would still revert back to the kinship and foundation of mutual support in going through this type of battle with my brother. Friends are great, but brothers are blood!  You can pre-order Season Six of Supernatural on DVD now.

“I have been hired by Warner Bros. WBWord division to promote Supernatural Season 6 on DVD.”