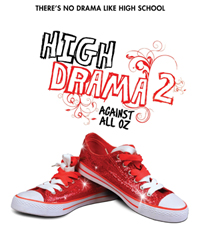 Are you missing new episodes of Glee this summer?   TheWB.com has the solution for you. “High Drama 2″ is an original web series only available on TheWB.com.   “High Drama 2” follows the theater company of Freedom High School in Bethlehem, Pennsylvania, as they put on their best show yet: The Wizard of Oz.   The difference is these are real students and a real school.   Cameras follow each cast members journey from auditions to closing curtain.   It is an emotional journey for each of them.

I was too shy to participate in drama, but I always wanted to.   If I wasn’t so shy I relate most to  Jackie, who tries out for the lead and is talented but doesn’t have as much confidence as the girl who wins the role of Dorothy.   She gets the role of Glinda the Good Witch instead.   She keeps a positive attitude about it and is happy to earn either role.   If you like musicals, reality shows and a good story, then you can watch “High Drama 2” for free online at TheWB.com.   I enjoyed the episodes and following each teenagers journey.  You can watch the first episode of their auditions below.   Let me know what you thought.

“I have been hired by Warner Bros WBWord division to raise awareness for ‘High Drama 2.'”

Mamapedia Has the Answers