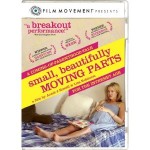 Small, beautifully moving parts, released on DVD by Film Movement on 9/4/12 and directed by Lisa Roberts and Annie Howell, has a female protagonist, Sarah (Anna Margaret Hollyman), who prefers machines to humans, and she doesn’t know why.

Sarah asks strangers on the street questions like, “Do you feel closer to the technology in your life than to the people in your life?”, and remarkably, sometimes she is given “Yes” as an answer.

Sarah loves her cell phone, her laptop, and every other device that she can use to communicate, rather than to actually spend time speaking in “real” life. Directors Howell and Robinson are interested in not only technology geeks, but what it means to come of age in the internet era, and how our lives have changed since “unlike any other time in human history, most adults carry around small, elegant machines
virtually everywhere they go and cannot seem to function without them.”

Sarah finds out that she’s pregnant, which makes her uneasy, but which makes her partner Leon (Andre Holland) very happy (and he himself is far less addicted to the care of and the protection of machines). Sarah visits her sister Emily (Sarah Rafferty), flying from New York to California to do so, and is given a baby shower, along with a baby-monitoring machine as one of the presents. There she is reminded of the fact that she doesn’t have a mother to guide her through her pregnancy and the early raising of her child (her mother having withdrawn from the family years ago and now even having left behind Sarah’s father to join a community in a domed home to practice her special kind of spirituality).

Sarah visits with her father Henry (Richard Hoag), who is obsessed with a virtual relationship with a woman in Brazil and wants Sarah to fix his computer when he can’t reach the woman. Sarah drives into the desert to find her mother and the GPS navigation system on her car breaks down, which really upsets her. She keeps phoning her husband for advice.

Through a variety of trials (as she also snaps photos of families at rest stops and asks them if the photos represent fake happiness on their part), Sarah finally finds her mother Marjorie (Mary Beth Peil), and is disappointed because her mother’s asceticism (fasting, sitting in zazen, taking a vow of silence) takes precedence over her connection with her own daughter. When Sarah’s husband unexpectedly arrives, Sarah cries, but because of their warmth and care for each other, Sarah learns that she can care for her own child, despite her emotionally deprived past.

Small, beautifully moving parts is a touching story of loss and gain, of the natural and the artificial, of how far we will go to convince ourselves that we are loved (Sarah loves the GPS because it talks to her and addresses her by name). Anna Margaret Hollyman in the main role does an excellent job as Sarah Sparks, a woman who knows her

own talents but is reaching out for she-knows-not-what, an unknown territory that she will have to develop by herself with the help of her partner.