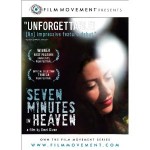 Galia (Reymond Amsalem) and her boyfriend Oren (Nadav Netz) board a bus in Jerusalem one morning, and the bus explodes because of bombs placed there by terrorists in the DVD Seven Minutes In Heaven, released by Film Movement on July 10, 2012. Galia’s back is badly burned and she loses consciousness for seven minutes but Oren goes into a coma for a year and then dies.

Galia cannot recall what happened to her on that day, remembering only that she woke up in the hospital. Everyone tells her that she’s lucky to have survived, but she wants her life and her boyfriend back and doesn’t understand why Fate has pointed its finger at her. She’s listless and unhappy and keeps remembering Oren, and she wonders why she keeps running into a guy

named Boaz (Eldad Prives) who gives her rides in his car and seems to like her and care about her.

Trying to understand what occurred and feeling guilty because Oren got on the bus with her that day instead of the later one he usually took, Galia tries to find out if there is someone who can give her more information. She is told to find her paramedic because he’s the one who helped her out of the bus. Her sister Sarit (Sharon Zuckerman) urges Galia to start a new life.

Director Omri givon, about watching the news on TV and seeing some buses that had been exploded by terrorists, writes, “There was a shot of a deserted parking lot with about four or five buses that were completely blown up, and that image blew me away and took me to a place where I suddenly saw a young woman standing in front of a bus,” which is why he started writing this film script. Very few films deal with the aftermath of a terrorist attack and the personal trauma that those left behind must endure.

Reymond Amselem gives a strong and sensitive performance as Galia, as does Eldad Prives as Boaz. This film has a psychological impact on the viewer and is supported by a quote about souls not yet ready to go to heaven. Omri Givon’s Seven Minutes In Heaven is sad and hopeful and unique and gives us reason to believe there will be many more engaging films in the future from this Israeli director.

Christina Zawadiwsky is Ukrainian-American, born in New York City, has a degree in Fine Arts, and is a poet, artist, journalist and TV producer. She has received a National Endowment for the Arts Award, two Wisconsin Arts Boards Awards, a Co-Ordinating Council of Literary Magazines Writers Award, and an Art Futures Award, among other honors. She was the originator and producer of Where The Waters Meet, a local TV series created to facilitate the voices of artists of all genres in the media, for which she won two national and twenty local awards, including a Commitment to Community Television Award. She is also a contributing editor to the annual Pushcart Prize Anthology, the recipient of an Outstanding Achievement Award from the Wisconsin Library Association, and has published four books of poetry. She has reviewed music for Music Room Reviews, films for Movie Room Reviews, Movie Scribes, and FilmSay, and is currently reviewing books and films online for Book Room Reviews at www.bookroomreviews.com and showing artwork