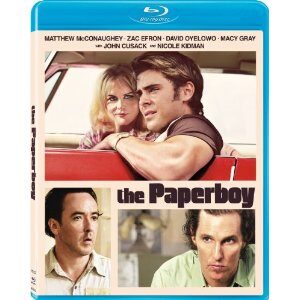 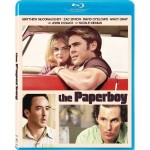 The Paperboy (released by Millenium Entertainment on Blu-ray on 1/15/13) is a film about choosing the wrong life-partners. But it has many levels – there is also a plot about trying to prove that Florida swamp-dweller Hillary VanWetter (John Cusack) did not kill a corrupt local sheriff and was wrongfully imprisoned. A highly unusual film told from the perspective of a family’s “colored” maid, Anita (Macy Gray), who has raised young Jack (Zac Efron) and his brother since they were children, the film is directed by Lee Daniels (Precious), who makes many points about black-white relations in the late 1960’s, a time of upheaval during the fight for integration.

Jack has come home after leaving college and works delivering newspapers for the family newspaper business run by his father, played by Scott Glenn (in his last film appearance). Jack’s brother is investigative reporter Ward (effectively played by Matthew McConaughey) who works with a black partner, Yardley (David Oyelowo), who pretends to be a sophisticate from London in order to ward off racial slurs. Charlotte Bliss (enacted by Nicole Kidman, whom many would think could not play an aging “white trash” woman, but who is suberb in this role) has been corresponding with prisoner Hillary Van Wetter while he’s in prison (never having met him before) and brings his case to Ward and Yardley as someone who’s been wrongfully accused. Jack falls deeply in love with Charlotte despite their vast age difference and social status.

John Cusack has said that this was one of the juiciest parts he’s ever had and that prisoner Hillary Van Wetter is dark in spirit, so different from others on this earth that he’s almost an alien. Indeed the innate intelligence and wittiness that usually shows through in other characters that Cusack has played is now dimmed as he becomes dull-eyed Hillary, bent on getting what he wants (a woman and companion for his home deep in an isolated South Florida swamp) and acquittal for the crime he probably didn’t commit (throughout the film his innocence is always being questioned). Nicole Kidman as Charlotte is alternately blissful and giddy and sexy and worried, fending off Jack’s advances with statements like, “You have your whole life in front of you – and you want me?” in an effort to tell him that he can do better. Like Jack, she too chooses the (violent and domineering) wrong person with whom to try to live her life, as does brother Ward, in his bouts of secret night-time carousing.

What is justice? It a maid who has raised two young boys part of the family or just a an unimportant servant of another (subservient) color? Should a demon with an over-riding sense of evil (John Cusack’s portrayal of Hillary) be allowed to live among other people? Should Charlotte cave to Jack’s advances to help improve her life, or should she be guided by vague notions of being with someone who has a “dark side” (Hillary) which she assumes is no darker than her own? The Paperboy is a very different film that never utilizes the typical killer formula but shows the complex and contradictory natures of real human beings. People aren’t who we initially imagine them to be (as often occurs in life).
Cheers for a director who is not afraid to show people’s true and not typically Hollywood film natures, and to John Cusack’s and Nicole Kidman’s truly transformed personalities!

Christina Zawadiwsky is Ukrainian-American, born in New York City, has a degree in Fine Arts, and is a poet, artist, journalist, critic and TV producer. She has received a National Endowment For The Arts award, two Wisconsin Arts Board awards, a Co-Ordinating Council Of Literary Magazines Award, and an Art Futures Award, among other honors. She was the originator and producer of Where The Waters Meet, a local TV series created to facilitate the voices of artists of all genres in the media, for which she won two national and twenty local awards, including a Commitment To Community Television Award. She is also a contributing editor to the annual Pushcart Prize Anthology (and has received one herself), the recipient of an Outstanding Achievement Award from the Wisconsin Library Association, has published many books

of poetry and has had poetry and fiction in hundreds of literary periodicals. She has reviewed music for Music Room Reviews, films for Movie Room Reviews, Movie Scribes, and FilmSay, and is currently reviewing books and films online for Book