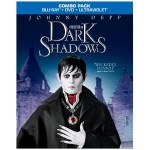 Dark Shadows (in a Blu-ray Combo Pack that includes a Blu-ray, DVD and UltraViolet), released on October 2, 2012, by Warner Brothers Home Entertainment, begins with words about Family blood ties: “It is said that blood is thicker than water. It is what defines

us, binds us, curses us……For some, blood means a life of wealth and privilege; for others, a life of servitude.” Later Dark Shadows also ends with words about family and blood ties.

In 1760 Barnabas Collins leaves Liverpool bound for Maine in America with his father Joshua and his mother Naomi. Joshua starts a successful fishing industry in Maine, builds an ancestral home there, Collinwood Manor, and has a town named after him, Collinsport. But Joshua reminds Barnabas that “family is the only real wealth.”

When Barnabas (Johnny Depp) has spurned Angelique (Eva Green) because he loves Josette DuPres (Bella Heathcote), the thwarted Angelique, who is a witch, curses the family, causing Barnabas’s mother and father to die while also making Josette fall backwards off a cliff into the sea below. Angelique then turns Barnabas into a vampire so he can suffer forever, first entombing him for 196 years.

Breathtaking visuals of natural scenery, a fast tempo combined with well-known songs like Knights In White Satin, and superb performances by iconic actors like Johnny Depp and Michelle Pfeiffer move the plot along rapidly.

Victor Winters (also played by Bella Heathcote) arrives at Collinswood Manor “from New York” in 1972 to take up residence as a nanny. Elizabeth Collins Stoddard (Michelle Pfeiffer) lives at Collinwood Manor with her broher Roger (Johnny Lee Miller), her daughter Carolyn (Chloe Grace Moretz), and Roger’s 10-year-old son David (Gully McGrath). Victoria Winters looks almost exactly like Barnabas’s true love Josette of long, long ago. An emotional storm cannot help but erupt in this clash of the past and the present, when Angie (also played by Eva Green), a leading citizen of Collinsport who looks like Angelique of yore, tries to keep Barnabas from rebuilding his family business.

Gazing wild-eyed first at gas stations and then hi-fis and TVs in shop windows with girls walking by in miniskirts, Barnabas is perplexed and bewildered to be walking the earth of his former future in 1972. Because he looks just like the portrait of his supposed ancestor (a portrait for which he actually posed), the family accepts Barnabas as heir own when he’s suddenly freed from his tomb. When Barnabas asks that they bring out the horses, he is told “We don’t have horses, we have a Chevy.”

Dark Shadows is filled with witty pokes at society’s norms, as Barnabas thinks a “tiny songstress” resides in the television set and that a lava lamp is “a pulsating blood urn.” Barnabas tries to soak up contemporary culture so that he can court Victoria, and Angie is infuriated.

secrets about the identities of Collinswood Manor’s inhabitants are disclosed to us in intense scenes before the film’s end. And of course there are the important questions: Will Angie-Angelique conquer Barnabas and his family? Will Victoria meet a fate similar to Josette’s? Will Barnabas and Victoria be able to be together? Only viewing this remarkably rich, age-old tale will give us the answers.