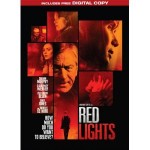 When director Rodrigo Cortes created the film Red Lights (released by Millennium Entertainment/Falco Ink on October 2, 2012 on Blu-ray and DVD), he was trying to show how contradictions among people in our world have to co-exist. For example, those who believe in the paranormal and those who debunk it, believing only in science instead, still often have to live next to each other. Actor Cillian Murphy, who plays protagonist Tom Buckley with great intensity, feels that many people today desperately need to believe in paranormal activity, but he himself is not  convinced. Sigourney Weaver states that in playing Dr. Margaret Matheson, a parapsychology professor, she was acting in one of the smartest woman roles she’s ever had, and is grateful that Rodrigo Cortes made Dr. Matheson such a complex character.

who was supposed to be legendarily famous, and he chose Robert DeNiro for the role. Dr. Matheson and Tom Buckley monitor many psychic frauds, including ghost whisperers, those who have seances, and faith healers, and usually expose them, and later Buckley works with his star student (played by Elizabeth Olsen) to denounce Simon Silver, who’s returned to the stage after many years of retirement. Silver takes a series of tests in which he bends spoons, reads cards that he can’t see correctly, and moves objects, and in a display of lightning and crashing glass he calls out Buckley to challenge him.

“Red lights” is the term Dr. Matheson uses for the subtle tricks behind every staged performance. Carrying the secret of what’s happened to her son (yet deciding not to believe in miracles), Sigourney Weaver gives a great performance as a determined and intelligent woman tortured by parts of her own life while Cillian Murphy is amazing as sensitive Tom Buckley, who goes from a point of non-belief to a spectacularly different opinion by the film’s end. Definitely meant for Blu-ray and a large screen, Red Lights gives us the feeling of being in all the rooms where those who believe are trying to be healed while a sense of danger and mystery pervades every shot.

I recommend Red Lights to all those interested in the paranormal, whether they are believers or not! Using examples of what tricks our brains can play on us (and not in the expected manner!), Rodrigo Cortes certainly has a winner in this film. Special Features include Cast Interviews, a Director’s Interview, the Making Of Red Lights, and Behind The Scenes.