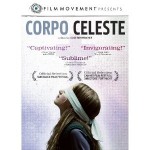 Marta (Yle Vianello) doesn’t fit in with her peer group in the movie Corpo Celeste, which means “Beautiful Body” (released by Film Movement on 11-6-12). She’s in a Confirmation class at church where all of the others have had bonded friendships since they were toddlers, but Marta’s family has been living in Switzerland for the last ten of her thirteen years on this earth and they’ve recently just returned to Italy. Marta’s alone and dealing with puberty (stealing her older sister Rosa’s – Maria Luisa de Crecenzo’s – bra and constantly dealing with Rosa’s severe criticisms).

Santa (Pasqualina Scunzia), the Confirmation class teacher, has all the adolescents reciting their catechism by rote (which is for them yet another shared experience). Marta is on the outside and wants to understand particulars about the Roman Catholic faith, but when she asks questions of Santa she is told that “this is not the time.” The children laugh at Santa (even when she falls on a slippery floor and could have been injured) and disrespect

Confirmation class is the confirming of Catholic beliefs that the children’s parents had established for them when they were baptized as babies, but now they are supposed to cognate and agree with the tenets of the Church. Marta can’t respond positively without really comprehending (as her questions remain unanswered). She shyly tries to confide in her mother (Anita Caprioli), who cares about her but is exhausted from working in an industrial bakery for very long hours every day. Debby (Maria Trunfio), Marta’s younger sister, is instrumental in Marta’s rebellion, although unwittingly so. Santa scapegoats Marta, implying that she hasn’t learned anything while she’s been away.

Marta’s sense of loneliness, which we hear in her silences and her refusal to eat “new” Italian foods like calamari, is so poignant that it’s much like a piercing scream.

The hypocrisy of priests and the hierarchical structure of the Church are apparent to Marta when the head priest in her church wants to bring a large crucifix back from the town in which he was born to his present parish just to impress a bishop. Obviously Marta is scared to cross the unspoken lines her superiors have set, but she also can’t pretend to espouse beliefs that her personality cannot accept, even if it makes her an outcast. Even Santa is upset when the bishop, through his minions, reminds Santa that she is far down on the lowest rungs of the Church’s ladder as he indicates that its male authorities are far more significant than she is.

We identify with Marta as a young outsider, brimming with questions about what life is really all about, including whether respect for actual life itself (in the form of a box of newly-born kittens that Marta finds) is important. Is Jesus a smiling long-garbed paternal figure who loves her and all of the other children, or is he the angry human who cries out “My God, why have you forsaken me?” An extremely intimate and thought-provoking film that raises many important social issues from a new voice in European film, director Alice Rohrwacher (who will certainly be watched for her films in the future). Very sensitive performances by all the actors make this a compelling drama.

The short film Raju, by German director Max Zahle, addresses the integrity of keeping a child from an orphanage that a young couple adopts and truly wants when they realize that he has been kidnapped and sold and that his real parents are actually still living.

Christina Zawadiwsky is Ukrainian-American, born in New York City, has a degree in Fine Arts, and is a poet, artist, journalist, critic and

TV producer. She has received a National Endowment For The Arts award, two Wisconsin Arts Board awards, a Co-Ordinating Council Of Literary Magazines Award, and an Art Futures Award, among other honors. She was the originator and producer of Where The Waters Meet, a local TV series created to facilitate the voices of artists of all genres in the media, for which she won two national and twenty local awards, including a Commitment To Community Television Award. She is also a contributing editor to the annual Pushcart Prize Anthology (and has received one herself), the recipient of an Outstanding Achievement Award from the Wisconsin Library Association, and has published four books of poetry and has had poetry and fiction in hundreds of literary periodicals. She has reviewed music for Music Room Reviews, films for Movie Room Reviews, Movie Scribes, and FilmSay, and is currently reviewing books and films online for Book Room Reviews at www.bookroomreviews.com while also showing artwork professionally.