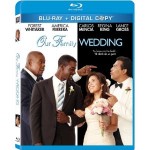 In a strange twist on a family cultural clash, Our Family Wedding is a July 13th Blu-ray release from Twentieth Century Fox Home Entertainment, that stars Academy Award winner Forest Whitaker (The Last King of Scotland) and Carolos Mencia (“Mind of Mencia”) as feuding fathers from different cultures trying to overcome their differences to help their kids have a happy wedding.

Marcus (Lance Gross of Meet the Browns) and Lucia (America Ferrera of “Ugly Betty”) are ambitious college students who fall in love and return to tell their parents they are going to get married before Marcus must leave to volunteer in Laos.

Lucia is a law student who has a secret to share with her parents even greater than the one revealed immediately when the two families get together.  Marcus and Lucia, unaware that their fathers Brad (Whitaker) and Miguel (Mencia) have already had an unpleasant encounter earlier in the day, surprise their families with their multi-ethnic relationship.  Marcus is black and Lucia is Latino.

The premise of Our Family Wedding is centered on the family’s (especially the fathers) feud that escalates as each side wants to be in charge of the wedding celebration.  Marcus and Lucia are quickly told the wedding is for the families and the marriage is for them.  As Brad and Miguel struggle, or at least put little effort into, overcoming their differences, it is Lucia’s secret that begins to eat away at her relationship with her dad, and her fiance.

Unfortunately for the viewer, Our Family wedding lacks substance and adequate entertainment value to measure up to its individual talents.

Forest Whitaker is a dramatic star who can be a good fit in a comedy if his character is well-developed.  In this case, it is not. Carlos Mencia is not equipped to be a co-lead and drive a film with comedic interaction given his background as a stage comedian.  American Ferrera is solid in her own right, but is mired in a movie that is not up to her standards.  Lance Gross is decent as the male romantic lead, but his character is overshadowed by the domineering dads and Ferrera’s presence.

Our Family Wedding is an example of a romantic comedy movie that offers a unique concept (family cultural clash that does not involve caucasians), but lacks plot development, substance, and effective drama and comedy to keep the viewer engaged.  It is a rare movie with A-list stars that you could very easily stop before it ends.

There are some nice special features in the Our Family Wedding including several deleted scenes, extended scenes, the “Til Dads Do Us Part” featurette, and gag reel.  Sadly, you may find these extras to be of more value than this underperforming comedy movie.