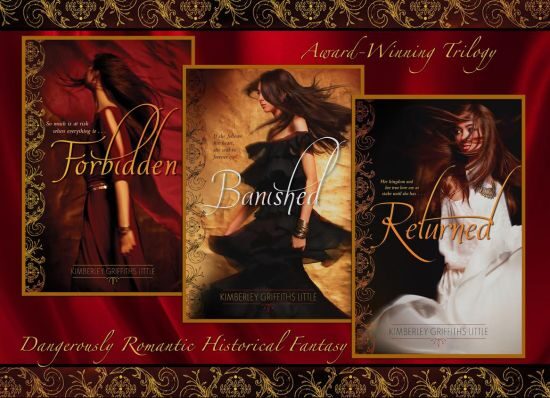 Returned: Book Three in the

A sweeping, epic saga of romance and hardship, set against the dramatic backdrop of Ancient Mesopotamia—for fans of Cleopatra’s Moon or the adult bestseller The Red Tent.

After tragedy strikes on the day they were to wed, Jayden must support Kadesh as he ascends the throne and becomes king of Sariba. But with the dark priestess Aliyah conspiring to control the crown, and the arrival of Horeb, Jayden’s former betrothed, Kadesh’s kingdom, as well as his status as king, is at stake.

Jayden knows that the time to be merciful has come and gone, and that some enemies can only be halted by death. Now she and Kadesh must prepare to fight not only for their love, but also for their kingdom.
This is the final book in the epic trilogy that began with Forbidden and Banished. Jayden and Kadesh’s love will be put to the ultimate test as they fight a war to save their kingdom.

Praise for the Book

“At its core, this is a romance, with all the push and pull that goes along with impossible love, and Little elevates the story by creating a perilous landscape, both outward and inward, as Jayden must deal with the hardship of desert life as well as her own desires. . . descriptions of the landscape are evocative in both desolation and in beauty. Just as good is the pacing, which gets the blood pumping for both characters and readers. This will heighten anticipation for a no-doubt exciting conclusion.” 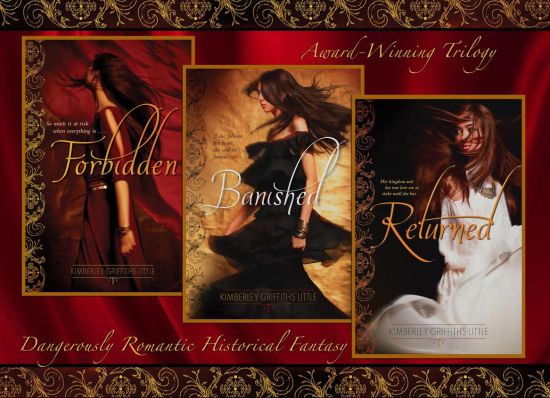 Bulletin of the Center for Children’s Books

“Rich historical details are deftly woven into Jayden’s narration, and the dynamics of Jayden’s tribe are vividly drawn. Jayden’s story becomes as much about finding herself as it is about finding love.”

Reader: “This book took my breath away. I loved the immersive story and the rich setting of ancient Mesopotamia. The customs, traditions, and beliefs of the desert people were captivating and every time I set the book down I couldn’t wait to pick it up again. I’ve never read anything like this before.”

Reader: “Forbidden was so captivating that I awoke early in the morning, while my family was still sleeping, so I could finish the last pages of this beautifully haunting tale.”

EXCERPT:
My sister laid the tablet in her lap, running a finger along the symbols with affection.
“To Jayden, daughter of the Nephish
From Aliyah, Goddess of Sariba
The Goddess and High Priestess of Sariba officially invite you to witness the summer solstice sacrifice in two day’s time. It will be a night you will remember for the rest of your life. A permanent kinship with the Goddess will bless you and your family forever.”
“She sent an invitation to watch Sahmril sacrificed!” Grabbing the tablet, I threw it across the room where it hit the corner of a table and broke into pieces.
With a shriek, Leila staggered off the chair and crawled across the floor. Picking up the shards, she cradled them in her hands, trying to fit them together.
“Leila, what is wrong with you? How could you bring this despicable letter to me?”
She raised her eyes to mine. “You’ve been invited as a special guest because our little sister has been chosen to honor the Goddess. Her sacrifice will bring peace and love to this land. She is the pure vessel. We’re so lucky to have found her.”
“Lucky?” I echoed. The nonchalance manner in which she spoke was horrifying. “Our sister was hunted down for the express purpose of sacrificing her to the goddess.”

Kimberley Griffiths Little is the author of ten award-winning Middle-Grade and Young Adult novels with Knopf, Scholastic and Harpercollins, including the Whitney Award, the Arizona/New Mexico Book Award, the SCBWI Crystal Kite, the Southwest Book Award, and others. ALA BOOKLIST named FORBIDDEN, the first book in her Ancient Mesopotamian historical fantasy a Young Adult Top 10 novel for the Historical category, Romance category, and Religious/Inspirational.

Kimberley adores anything old and musty with a secret story to tell. She once stayed in the haunted tower room at Borthwick Castle in Scotland and didn’t sleep a wink; sailed the Seine in Paris; ridden a camel in Petra, Jordan; shopped the Grand Bazaar in Istanbul; and spent the night in an old Communist hotel in Bulgaria. She was born in San Francisco but now lives on the banks of the Rio Grande with her husband and three sons.

Aoleon The Martian Girl Part two The Luminess of Mars –

Step into Magic (Portals to Whyland Book 1) by Day Leitao